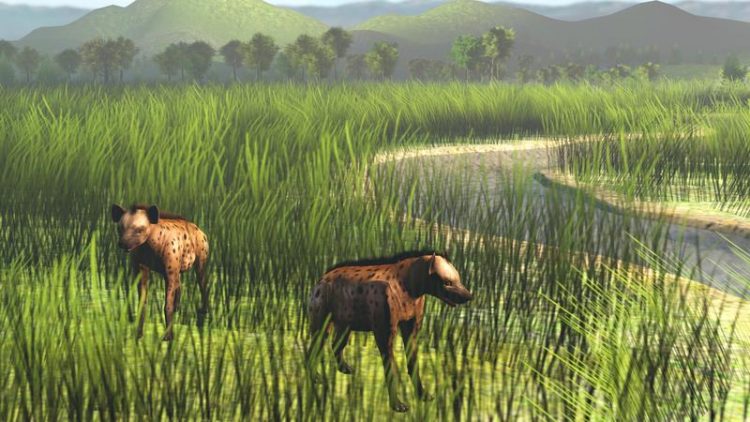 Paleoenvironments in Peninsular Thailand where extinct species of the spotted hyena lived during the past 100,000 years. Kantapon Suraprasit, University of Tübingen

New research from the University of Tübingen indicates that the Thai-Malay Peninsula – where parts of Malaysia, Myanmar and Thailand are located – was at least partly an open savannah during the Ice Age, when the peninsula was part of a much larger land now known as the Sunda Shelf.

It is likely to have provided a corridor for large mammals from mainland Asia to reach today's islands of Sumatra, Borneo and Java for the first time, between 120,000 and 70,000 years ago. That is the conclusion reached by Dr. Kantapon Suraprasit, a Humboldt Research Fellow at the University of Tübingen and a lecturer at Chulalongkorn University (Thailand), and Professor Hervé Bocherens of the Senckenberg Centre for Human Evolution and Palaeoenvironment at the University of Tübingen, working with other Thai researchers.

The team carried out isotope analyses on the teeth of Ice Age mammals found on excavations in the region. Scientists have long hotly debated how animals and early humans migrated between the mainland and the islands of Southeast Asia. These latest findings strengthen the hypothesis that a savannah corridor existed during the Ice Age, giving humans and animals relatively easy passage to the south and east from mainland Asia. The study has been published in Quaternary Science Reviews.

The Yai Ruak Cave, located in Thailand’s Krabi Province, was excavated in 2017 by a team of Thai paleontologists from Chulalongkorn University and the Department of Mineral Resources (Bangkok), with the help of local people. In the cave sediments, the excavators found some near-complete lower jaw bones, individual teeth and bones.

The fossils were of the Malay porcupine, the Javan rhinoceros, the Sambar deer and extinct relatives of the spotted hyena. “This is the southernmost evidence found in Southeast Asia of this kind of hyena,” says Hervé Bocherens. This supports the hypothesis that in the Pleistocene, mammals were able to spread further south.

Because sea levels were much lower during the Ice Age, today’s islands of Sumatra, Borneo and Java on the Sunda Shelf were connected by land bridges. Although human fossils were not found in the cave, anatomically modern humans may have been present in the area at that time, the researchers say.

Kantapon Suraprasit carried out carbon and oxygen isotope analyses on the tooth enamel of all the animal species found in the Yai Ruak cave, at the University of Tübingen’s biogeology laboratory. Isotopes are atoms of the same chemical element with different weights. From their frequency distribution – or isotope signature – scientists can draw conclusions about the type of food an animal ate and the environmental conditions during its lifetime.

“The region where the fossils were found is now covered by rainforests. We were therefore surprised that the isotope signatures from the teeth of the spotted hyenas and Sambar deer indicate an open grassland,” says Suraprasit.

But the teeth of the Javan rhinoceros and the porcupines produced isotopic signatures that match forests, Suraprasit says. He concludes that there were several different ecosystems in the area – including an open landscape. “These results confirm that a savannah corridor existed at that time along the tropical monsoon regions, stretching to the south of what is now Thailand, as far as the latitude of the previously exposed Sunda Shelf,” says Hervé Bocherens.

Of all the animals migrating south while sea levels were lower, the grassland-loving hyena may have been one of the few to be put off by a rainforest belt which curved from northern Sundaland across today’s Borneo and Sumatra, crossing the savannah corridor. To date, no fossils of spotted hyenas have been found south of the Yai Ruak cave.

“There were likely dense rainforests that formed a barrier. At that time, the hyenas could not go further south to the lands which are now islands, but other Yai Ruak mammal species and possibly humans could,” Bocherens explains. Pollen analyses indicate closed forest vegetation from Sumatra to Borneo back then, as well as on parts of the Malay Peninsula.

The research team hopes that the ongoing excavations at Yai Ruak cave will provide more information in the future about these diverse ecosystems and their influence on the faunas of the Southeast Asian mainland and the islands.