Home / Earth Sciences / Amphibians and dinosaurs were the new large predators after the mass extinction
20.03.2014 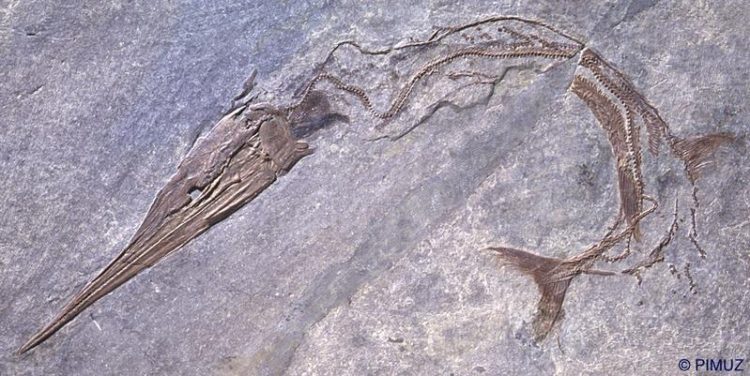 252 million years ago the largest extinction event occurred at the end of the Permian age. It wiped out almost 90 percent of all life in water.

So far researchers had assumed that the ecosystems gradually recovered from this catastrophe over a long stretch of eight to nine million years and that large predators at the uppermost end of the food chain were the last to reappear.

A Swiss-American team of palaeontologists headed by Torsten Scheyer and Carlo Romano from the University of Zurich demonstrate in their new study that the food nets during the Early Triassic did not recover in stages. Large predators like, for instance, crocodile-like amphibians and later the precursors of the known plesiosaurs and ichthyosaurs went in search of prey in the oceans soon after the end of the mass extinction.

Large predators in on the action from the very start

Apex predators – large predators at the uppermost end of the food chain – are extremely important for the health and stability of an ecosystem. They eradicate sick and weak animals and exercise constant selection pressure on the species they prey on. Hence, Scheyer and his colleagues wanted to establish whether the apex predators really were missing from the oceans after the mass extinction and how the ecosystems functioned.

The researchers looked at the global distribution of predatory marine vertebrates and their body size in the Early and Middle Triassic and came to surprising conclusions. “The apex marine predators recovered after the large extinction over a very, comparatively short period of time”, says Torsten Scheyer.

The researchers were also able to refute a second theory. Earlier it had been assumed that marine predators grew continuously larger from the Early to the Middle Triassic culminating in the apex predators.

“We now demonstrate that already in the Early Triassic large predators hunted in the seas”, adds Carlo Romano.”The length of the food chains was not shortened by the end-Permian mass extinction. Nor are there any signs of a gradual re-emergence of the classical trophic pyramids from the base to the top”, explains Hugo Bucher.

To gain greater understanding of food webs, attention had to be paid not only to the shape of the food webs but also to the dynamics, i.e. the evolutionary rates of the participating species.

The large end-Permian mass extinction led to a completely new composition of apex predators. Large predatory fish were dominant in the Permian age but they had to share this role with predatory crocodile-like amphibians after the mass extinction. Another extinction event around two million years later, the End Smithian crisis, triggered changes in the group of apex predators. From this point in time fish and for the first time reptiles like, for instance, Askeptosaurus were at the uppermost end of the food chains.

“The role of the large predators always remained the same in the ecosystems; only the actors changed over the course of time”, comments Torsten Scheyer when summing up the new results. The researchers are convinced that insight into events in the past will contribute to better understanding of the impact of today’s climate changes on ecosystems.