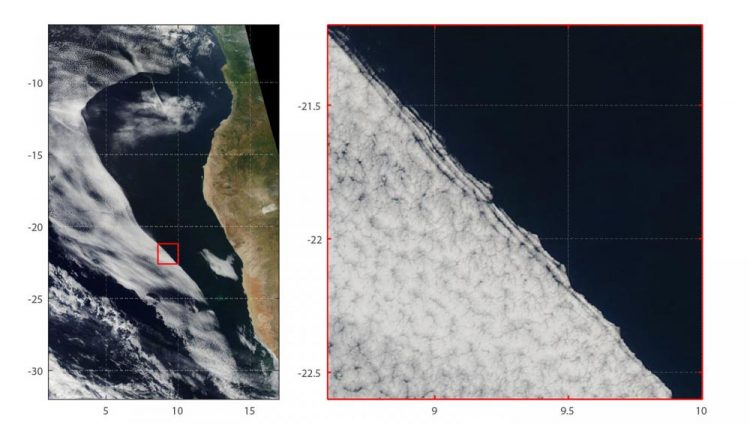 Example of a westward-moving cloudiness transition in the southeast Atlantic off the coast of Africa. (left) regional view and (right)showing detail of the sharp edge of the transition boundary. Credit: Satellite data courtesy of NASA Worldview. Usage Restrictions: Include credit to NASA Worldview; please do not edit caption language

Although clouds grow and dissipate all of the time, scientists think that these low-lying clouds off the coast of subtropical Africa are being disrupted not simply by wind from the continent, but rather by a wave mechanism.

For climate models, the way the clouds are being disrupted could make a big difference. The observations appear today in the journal Science.

“Low clouds are important because they help cool the climate,” said David Mechem, University of Kansas associate professor of geography and atmospheric science and one of the paper's authors. “These are huge sheets of white clouds that reflect sunlight back to space. When we try to do climate predictions for 50 years in the future, it's important to get these clouds right.”

Mechem worked with lead researcher Sandra Yuter and colleagues from North Carolina State University. The scientists worked together during the past few years, most recently to understand why the southeast Atlantic was averaging a bit less cloud cover than the other major regions of marine low clouds. Because of the relative lack of observations over the southeast Atlantic and African coast, their analysis was mostly based on satellite data.

“This is what we stumbled into — dramatic clearing events,” Mechem said. “We fixated on this because of its potential importance for climate models to represent this feature.”

The scientists set out to understand how these dramatic clearing events were happening. Winds from subtropical Africa do not simply blow the clouds westward across the ocean.

“What we think is going on is that the air flow from land to ocean overnight is triggering atmospheric waves that then move west,” he said.

The wind flow offshore off the southwest African coast is a common weather phenomenon Floridians or anyone who has visited the Sunshine State's coasts knows, Mechem said. During the day, the land heats faster than the ocean, causing a breeze blowing off the ocean toward land. At night, the land cools, and the wind blows back toward the ocean.

Mechem and his colleagues describe the wave movement as what it's like to be floating on a raft in the ocean far away from the shore, where you're bobbing up and down as the waves roll by.

“Air comes off the continent, interacts with the air over the ocean, and excites these waves, which move through the cloud field, promoting mixing and enhanced cloud evaporation,” he said.

What makes the findings released in Science today so important, Mechem said, is that it offers some insight into the behavior of these climatologically important, low-lying marine clouds over the southeast Atlantic that have proven challenging to understand.

“We have to know how they will respond to a warming climate,” he said. “Will you have more or fewer? This itself is just a natural event, but we'll be trying to go back and see if there's any trend in the number of these events.”

The work is supported by the National Science Foundation and the U.S. Department of Energy.