Home / Earth Sciences / A simpler way to estimate the feedback between permafrost carbon and climate
06.10.2015 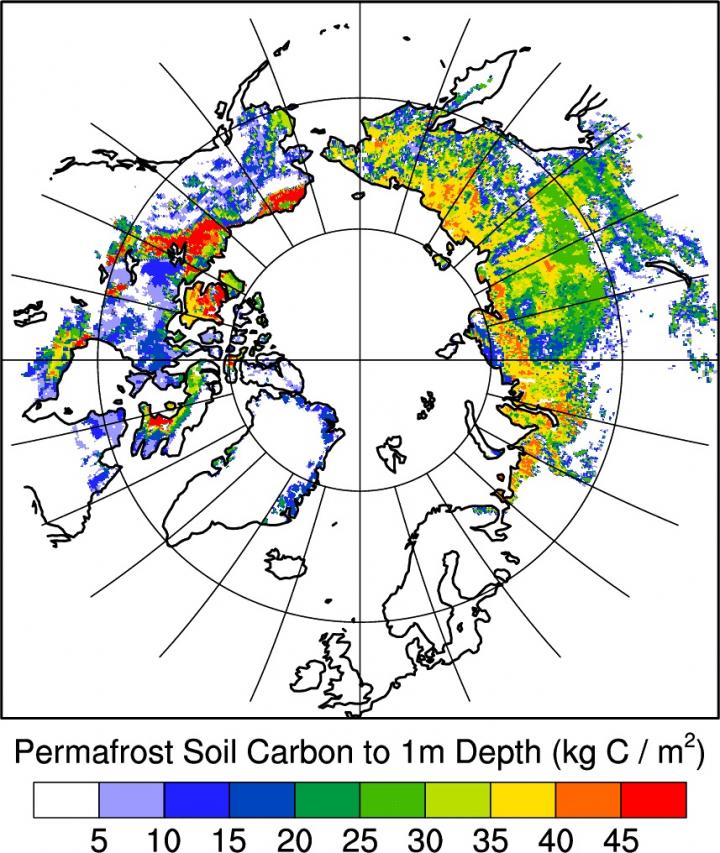 One of the big unknowns in predicting climate change is the billions of tons of carbon frozen in Arctic permafrost. As global warming causes soil temperatures to increase, some of this carbon will decompose and enter the atmosphere and accelerate climate change.

Although permafrost carbon has the potential to be a huge player in the planet's climate, it's difficult to predict the amount that will enter the atmosphere for a given increase in temperature. That's because the current way to estimate feedback between permafrost carbon and climate is by using complex Earth system models that include a wide range of atmospheric and land surface phenomena. When it comes to representing the dynamics of permafrost carbon, these models don't use data from direct observations of the amount of carbon that is currently frozen in Arctic permafrost.

Now, a team of researchers led by a scientist from the Department of Energy's Lawrence Berkeley National Laboratory (Berkeley Lab) has developed a simple model of permafrost carbon based on direct observations. Their approach could help climate scientists evaluate how well permafrost dynamics are represented in the Earth system models used to predict climate change.

The scientists present their research in a paper published online Oct. 5 in the journal Philosophical Transactions of the Royal Society A.

“In the classic way of evaluating how well climate models account for permafrost carbon, scientists ask: Does the model predict soil carbon levels that are close to what is observed?” says Charlie Koven, a staff scientist in Berkeley Lab's Climate and Ecosystem Sciences Division who led the research.

“But we flipped the question and started with: What are the actual, observed stocks of carbon in the soil? With this approach, we built the simplest possible model of Arctic permafrost carbon and its dynamics,” Koven says.

Their approach takes into account recently developed soil carbon maps that identify the distribution and type of carbon in permafrost soils in Alaska, Canada, and Russia. It also includes a meta-analysis of several lab studies in which permafrost was held at a constant above-freezing temperature for months or even years. These incubation experiments quantify the rates of carbon lost due to permafrost thaw. A third component is a meta-analysis of soil thermal models that track soil dynamics in response to climate warming. These models account for the effects of melting snow, freezing and thawing of soils, and differences in soil thermal properties, to name a few phenomena.

They averaged the results from the two scenarios, and found that for every one degree Celsius of global warming, the amount of permafrost carbon that enters the atmosphere is equivalent to 1.5 years of global carbon dioxide emissions.

“We found for a given amount of warming, there is an extra amount of carbon released, which would lead to further warming–in other words, a feedback loop,” says Koven.

Koven notes that their approach doesn't include many important processes that may increase or mitigate carbon release from permafrost soils.

“But the beauty of simple models is they are very easy to understand. We know exactly what goes into this,” Koven adds. “The processes responsible for permafrost carbon-climate feedback have not been well represented in many models, and our approach is a way to start. It serves as a data-constrained estimate on the large-scale permafrost carbon response to warming.”

The research was funded partly by the Department of Energy's Office of Science.

Lawrence Berkeley National Laboratory addresses the world's most urgent scientific challenges by advancing sustainable energy, protecting human health, creating new materials, and revealing the origin and fate of the universe. Founded in 1931, Berkeley Lab's scientific expertise has been recognized with 13 Nobel prizes. The University of California manages Berkeley Lab for the U.S. Department of Energy's Office of Science. For more, visit http://www.lbl.gov.

A paper on this research, entitled “A simplified, data-constrained approach to estimate the permafrost carbon-climate feedback” is published online Oct. 5 in the journal Philosophical Transactions of the Royal Society A.