A giant mite in amber 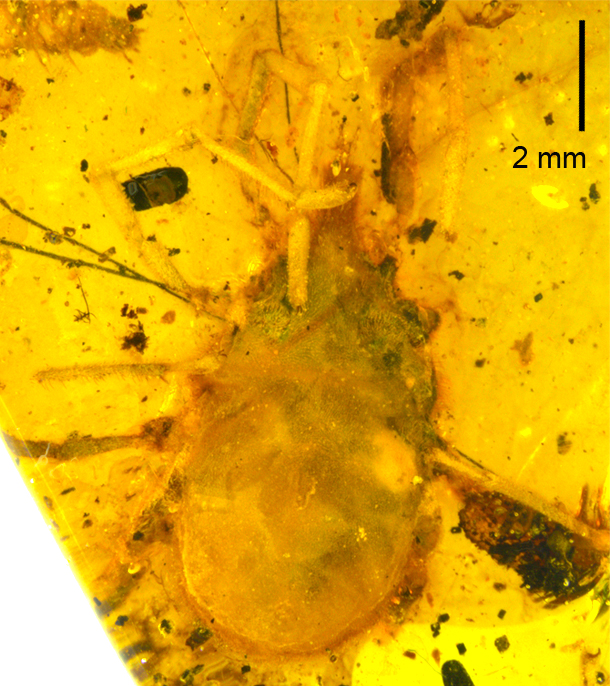 Mites are the most diverse arachnids, with more than 50,000 living species described. Most of them are tiny and largely inconspicuous. Fossil mites remain rare, although they are found fairly frequently in amber. But, due to their small size, they are difficult to study.

An unexpected discovery was thus a fossil mite, found in a private collection that has been purchased by the Museum. The animal in mid-Cretaceous Burmese amber of Myanmar is visible with naked eye and without the help of a microscope.

Dr. Jason Dunlop, scientist at the Museum für Naturkunde Berlin and expert for the evolution of arachnids, describes the discovery as “a fascinating insight into life in a tropical forest about 100 million years ago, when mostly insects and arachnids crawled under the feet of the dinosaurs. Several unusual arthropods have already been discovered in Burmese amber, and a giant mite is an interesting addition to the fauna.”

The new fossil belongs to a group of mites called the parasitengonids. Adults and some juvenile stages of these mites are predators, with extensible mouthparts which they use to probe for food, typically small insects or their eggs.

All known species of the group have a juvenile stage, in which they live as a parasite, usually sucking blood from an insect or another arachnid. However, the research team cannot say, what juveniles of this large fossil mite fed on.

Immensmaris chewbaccei also has feet with special hairs, which were not only inspiration for the name, but may have been an adaptation for climbing. If it climbed trees or lived on tree bark, this may explain how it became trapped in sticky resin which eventually solidified into amber.

Some living parasitengonids are relatively large with body lengths of a few millimetres. The newly discovered fossil is the largest of its family group and, indeed, one of the largest mites ever found. Only a single, living relative from another family of parasitengonids outrivals the Cretaceous relative. The giant velvet mite (Dinothrombium tinctorium) can reach 14 mm in length.