Siemens to deliver 34 locomotives to three states in the U.S. 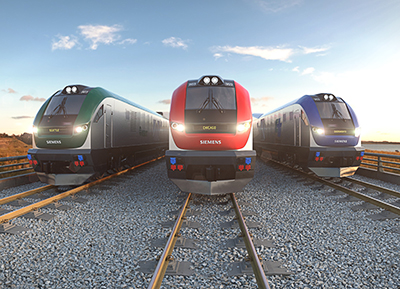 The picture shows a design rendering of the new locomotives.

The three states of California, Illinois and Maryland have ordered a total of 34 diesel-electric locomotives from Siemens. The California Department of Transportation (Caltrans) ordered 14 locomotives to serve the Pacific Surfliner Amtrak route along the southern California coast from San Luis Obispo to San Diego via Santa Barbara and Los Angeles.

The Illinois Department of Transportation (IDOT) will expand its fleet with twelve locomotives. And the Maryland Transit Administration (MTA) has ordered eight locomotives for the first time for the MARC commuter rail line that serves the cities of Baltimore, Brunswick, Frederick, Martinsburg and Washington D.C. as well as Harford County.

With this order, Caltrans, IDOT and MTA have called up further locomotives from the framework contract signed in March 2014. This contract foresees the procurement of up to 222 locomotives for passenger service by a number of federal states. The locomotives will be built at the Siemens rail manufacturing plant in Sacramento, California.

“With these new state-of-the art, energy-efficient locomotives, California can continue toward its goal to offer more alternative and sustainable transportation choices,” said Caltrans Director Malcolm Dougherty. “Not only will these new engines promote increased passenger rail ridership, but they will have environmental benefits by reducing the amount of automobile traffic.”

MTA CEO Paul Comfort added: “Approval of this contract enables us to replace older locomotives, thereby improving the reliability and efficiency of MARC for thousands of commuters, businesses and tourists that depend on this vital train service every day. This cooperative agreement also enabled us to purchase these eight new locomotives at a lower cost, which will save taxpayers money.”

“The new diesel-electric locomotives provide U.S. operators with a number of advantages. Their energy efficiency reduces costs and helps protect the environment. At the same time, they improve the reliability and efficiency of passenger rail service,” said Jochen Eickholt, CEO of Siemens Mobility Division.

The new passenger locomotives are designed to operate at speeds up to 200 kilometers per hour. The locomotives will also be FRA and Federal Transit Administration Buy America compliant with parts produced by suppliers in the United States. This includes Siemens' traction motors and gearboxes in Norwood, Ohio, and power converters in Alpharetta, Georgia. The locomotives will be powered by a 16-cylinder, 95 liter displacement, 4,400 horsepower-rated diesel engine built by Cummins Inc. headquartered in Columbus, Indiana.

A state-of-the-art microprocessor control system manages the performance of the locomotive and performs self-diagnoses that automatically make self-corrective action. The locomotive engineer and maintenance facility are notified about any required service measures.

To secure the power supply for the passenger coaches and maintain primary systems such as lighting, communications, heating and cooling, a traction converter provides backup when needed. The locomotive's car body structure meets the latest federal safety regulations, providing additional protection for the locomotive engineer.

The original procurement order for passenger locomotives by the Departments of Transportation in Illinois, California, Michigan, Missouri and Washington was signed in 2014. The order included the delivery of 35 diesel-electric locomotives for passenger service with a volume worth USD 225 million and included an option for up to an additional 222 locomotives.

Additional information about the Mobility Division is available at: www.siemens.com/mobility

Siemens AG (Berlin and Munich) is a global technology powerhouse that has stood for engineering excellence, innovation, quality, reliability and internationality for more than 165 years. The company is active in more than 200 countries, focusing on the areas of electrification, automation and digitalization. One of the world's largest producers of energy-efficient, resource-saving technologies, Siemens is No. 1 in offshore wind turbine construction, a leading supplier of combined cycle turbines for power generation, a major provider of power transmission solutions and a pioneer in infrastructure solutions as well as automation, drive and software solutions for industry. The company is also a leading provider of medical imaging equipment – such as computed tomography and magnetic resonance imaging systems – and a leader in laboratory diagnostics as well as clinical IT. In fiscal 2014, which ended on September 30, 2014, Siemens generated revenue from continuing operations of €71.9 billion and net income of €5.5 billion. At the end of September 2014, the company had around 343,000 employees worldwide on a continuing basis.