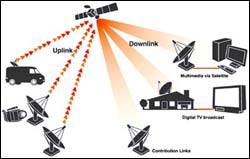 Eutelsat’s W3A satellite embarks five SkyPlex payloads with one “enhanced” SkyPlex unit. <br>Developed by the European Space Agency (ESA) with Alenia Spazio as prime contractor, SkyPlex is a payload designed for onboard digital multiplexing. <br>Since 1998 and its launch aboard Hotbird 4, SkyPlex has been a technological and commercial breakthrough in Satellite Telecommunications. Today there are 12 SKYPLEX units on orbit aboard the following Eutelsat satellites: Hotbird 4 (one unit), Hotbird 5 (3 units), Hotbird 6 (8 units). <br> <br>Credits: Eutelsat

SkyPlex is a technological and commercial breakthrough in Satellite Telecommunications. Due for launch on 16 March from Baïkonour aboard Eutelsat’s W3A satellite, SkyPlex will deliver Internet and TV services.

Developed by the European Space Agency (ESA) with Alenia Spazio as prime contractor, SkyPlex is used by Content Providers, companies and Internet Service Providers. Today there are 12 SkyPlex units in orbit aboard the following Eutelsat satellites: Hotbird 4 (one unit), Eurobird 2 (3 units), Hotbird 6 (8 units). The latest SkyPlex will have five classic units and, for the first time, an ‘enhanced’ SkyPlex unit that will be lighter and smaller.

SkyPlex is a payload designed for onboard digital multiplexing. The multiplexing facility provides much more flexibility and lower operating costs because broadcasters can uplink services directly. SkyPlex can receive video, audio and data uplink signals from several different geographic locations and multiplex them into a single DVB downlink signal.

The SkyPlex payload also offers a wide area coverage for broadcasters with instant access to a very large installed base of DVB (digital video broadcasting) receivers. Regional, local and thematic broadcasters can therefore benefit from easy and direct satellite access into millions of homes.

A simple 90 cm, 2 watt antenna is enough to “board” the satellite. Users have their own receiving/transmitting antenna, as small as today’s ones for satellite television, mounted on the roof of their home.

SkyplexNet is fully operational in several organizations to implement the following services:

The Service Provider, being independent, can manage its own customer base, create and offer programme schedules with video streaming, Web-based video products, IP-multicast and provide interactive services through a terrestrial return path. Users of the Service Centre need only a PC with a DVB card and a parabola, while corporate users can be connected by a LAN router.