International, interplanetary and no interference! Mars Express calls up Spirit 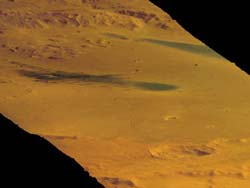 Spirit landed almost exactly in the middle of the area shown in this image taken by the HRSC <br>Credit: ESA

On 6 February, while Mars Express was flying over the area that Spirit is examining, the orbiter transferred commands from Earth to the rover and relayed data from the rover back to Earth.

“This was the first in-orbit communication between ESA and NASA spacecraft, and we have also created the first working international communications network around another planet,” said Rudolf Schmidt, ESA’s Project Manager for Mars Express. “Both are significant achievements, two more ’firsts’ for Mars Express and the Mars exploration rovers.”

ESA and NASA planned this demonstration as part of continuing efforts to cooperate in space.

The commands for the rover were first transferred from Spirit’s operations team at JPL to ESA’s European Space Operations Centre in Darmstadt, Germany, where they were translated into commands for Mars Express. The translated commands were transmitted to Mars Express, which used them to command Spirit. Spirit used its ultra-high-frequency antenna to transmit telemetry information to Mars Express, and the orbiter then relayed the data back to JPL via the European Space Operations Centre.

“This is excellent news,” said JPL’s Richard Horttor, project manager for NASA’s roles in Mars Express. “The communication sessions between Mars Express and Spirit were pristine. Not a single bit of data was missing or added, and there were no duplications.”

This exercise demonstrates the increased flexibility and capabilities of inter-agency cooperation and highlights the close mutual support that is essential when undertaking international space exploration.

More information on the ESA Mars Express mission can be found at http://mars.esa.int