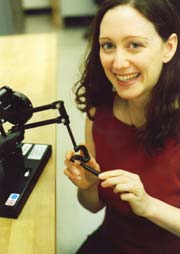 Sommer Gentry with the robotic arm she programmed to "dance" with her <br>Credit: Dorry Segev

The bubbly clarinet solo that opens a 1940s swing classic begins, setting a pair of dancers in motion. They move in constant rhythm, varying their steps to the song’s changing tempo. Slight pushes and pulls of the dancers’ hands allow seamless transitions between swing-outs, tuck turns and Texas Tommies.

You might call this swing dancing. Or you might call it a highly evolved system of communication and control via haptic (touch-based) signaling. Graduate student Sommer Gentry, an expert swing dancer, sees it both ways.

Gentry, who has appointments in the Department of Electrical Engineering and Computer Science and in the Laboratory for Information and Decision Systems, is investigating the complex haptic communication behind the often-improvised moves in swing dancing. Her experiments have already shown that pure haptic communication (without visual cues) is sufficient for two humans–or even a human and a robot–to move in coordination. The paper describing the results of Gentry’s human-robot experiments won the Best Student Paper Award at the 2003 IEEE Systems, Man and Cybernetics Conference.

Understanding the effectiveness of haptic communication in swing dancing could lead to broad applications in human-robot collaboration, says Gentry. “This is a research field with important applications,” she continued, such as robotic surgery. “There are existing steady-hand robots that [a doctor can] hold onto that will take the tremors out of their movement. Such robots could be improved by research like mine that might imbue the tool with a richer ability to understand and respond to what the user is doing based on a ’vocabulary’ of moves.”

“Sommer is entering an exciting area of research which is between engineering, psychology, and human motor-control studies. It could be of importance for sports training or rehabilitation engineering–the study of how to use technology to help humans overcome disability or injuries,” said Roderick Murray-Smith, a senior researcher at the National University of Ireland-Maynooth’s Hamilton Institute who collaborated with Gentry on her paper.

Gentry’s husband and dance partner, Dorry Segev (whom she met through dancing), is a chief resident in surgery at Johns Hopkins Hospital. “That’s where my interest in robotic surgery applications comes from,” she said. Melding her hobby with her work is great, she added, “because it means that even when I’m out dancing, I’m thinking about my research project.”

Gentry and Segev are seriously good at their hobby. They have performed all over the world and excelled in competition; they placed fifth in the 2001 and 2003 national Lindy Hop championships and first in the 2002 U.K. Lindy Hop Open. They also teach swing dancing, specializing in “1930s smooth-style Lindy Hop, collegiate shag and Balboa,” according to their web site, http://www.dorryandsommer.com.

Teaching inspired Gentry to view dancing from an engineering point of view. “I realized it was an engineering question: how do you dance well with someone? It would be great to give people mathematical and engineering proofs of why they have to dance the way I say.”

While there has been some scientific investigation of dance–on the physics of ballet, for instance–“what’s missing is any sort of partner-dancing aspect,” Gentry said. “Partner dancing involves both controlling your own body’s physical properties and communicating information to the other person.”

To prove the effectiveness of haptic signaling in swing dancing, Gentry first recruited a pair of fellow Lindy Hoppers and got them to dance while blindfolded. That experiment verified what she already knew from “Jedi” swing contests in which the follower or both dance partners are blindfolded: even without visual information, an experienced follower can correctly interpret the leader’s haptic signal (e.g., a push on the hand) by executing that signal’s corresponding move (e.g., a half-spin). She posited that this is because the dancers, in addition to receiving aural cues from the music, share a vocabulary of known moves.

The next step for Gentry was to program a robot to dance with a human. In 2002, while she was a visiting researcher at the Hamilton Institute, she programmed a PHANToM, an arm-like robotic device, to perform a random sequence of leads in time to “New York, New York.”

Human test subjects with varying degrees of dance experience held the “hand” of the PHANToM and managed, for the most part, to successfully follow its unpredictable leads. The key was their familiarity with the moves. It wasn’t exactly Fred Astaire and Ginger Rogers, but it was a solid first step in Gentry’s far-off goal: to design a truly interactive robot leader “who could signal move changes in advance, who could recognize an error in the follower and execute a different move to compensate for it”–just like an experienced human leader does.

Her motive is not to create a robot substitute for her husband. Rather, “in the process of recreating a partner dancer, I will have occasion to satisfy my overwhelming curiosity about how partner dance works with two people,” she said.

Figuring out how partner dancing works could apply to a wide range of other systems requiring simultaneous communication and control in real time.

More broadly, Gentry’s work “has relevance for how we interact with machines and computers,” Murray-Smith said. “In a few years, we might not view interacting with computers as a ’command and control’ scenario, but rather more like a waltz, where sometimes the computer leads the user and other times the user leads the computer, with smooth transfers of who is leading.”

Gentry is supported by a U.S. Department of Energy Computational Science Grad-uate Fellowship, awarded from 2001-05.