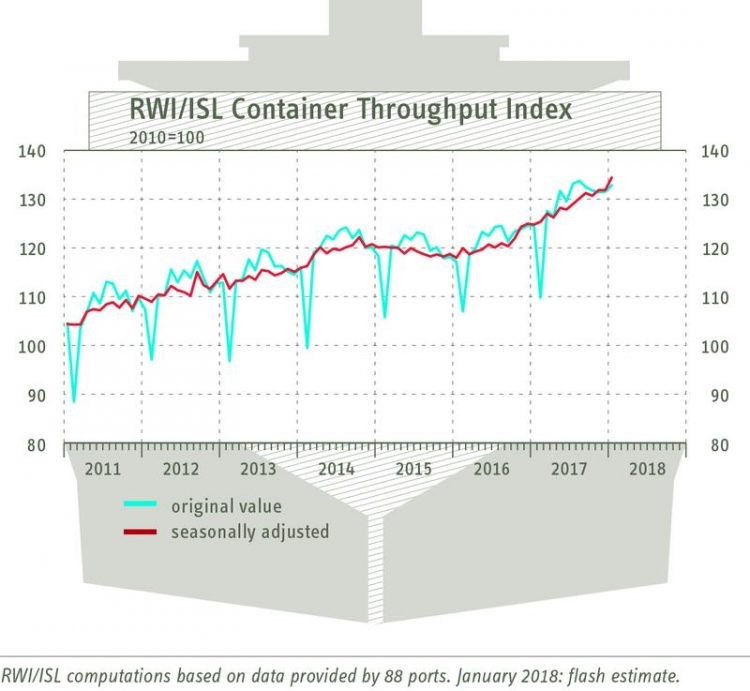 The Container Throughput Index of the RWI – Leibniz Institute for Economic Research and the ISL – Institute of Shipping Economics and Logistics recorded a strong increase during January 2018, climbing from a value of 131.9 in December 2017 (revised figure) to 134.4 in January 2018.

This is one of the highest monthly growth rates observed during the last eleven years. As such, it would seem that world trade continues to grow noticeably. However, because of the rather late Chinese New Year festivities, a clearer picture will present itself with the compilation of the February figures.

As usual, at the start of every year, the index compilation process is updated. This time, six new ports have been added: Alexandria (Egypt), Rio Grade do Sul (Brazil), Cartagena (Columbia), Bandar Abbas (Iran), Piraeus (Greece), and Sines (Portugal).

This update is partially responsible for the strong revision (+1.3 points) of the December 2017 figure. On average the values for 2017 are now higher by 1.1 points. After including the aforementioned ports, the seasonally adjusted RWI/ISL-Container-Throughput Index seems to be even more closely correlated to the recent world trade development, although the changes to the long-run time series are effectively quite small.

The index is based on data continuously collected from world container ports by ISL as part of its market monitoring. Because large parts of international merchandise trade are transported by ship, the development of port handling is a good indicator for world trade.

As many ports release information about their activities only two weeks after the end of the respective month, the RWI/ISL Container Throughput Index is a reliable early indicator for the development of international merchandise trade and hence for the activity of the global economy. As of 2018, the index is compiled based on data of 88 ports. Together these ports account for ~60% of worldwide container handling. The flash-estimate for January is based on data reported by 44 ports, accounting for three quarters of the total index volume.

The RWI/ISL-Container Throughput Index for February 2018 will be released on 20 March 2018.