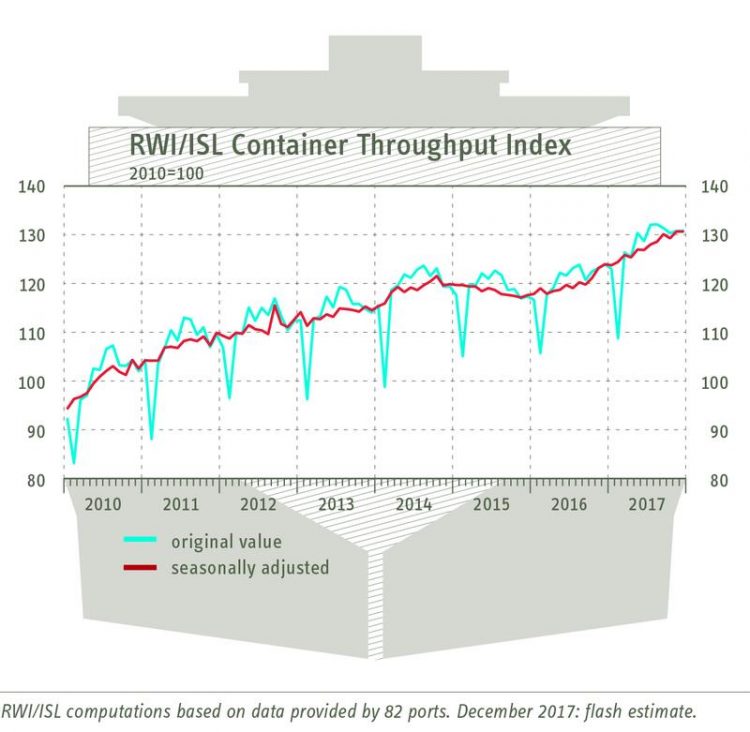 The Container Throughput Index of the RWI – Leibniz Institute for Economic Research and the ISL – Institute of Shipping Economics and Logistics was able to maintain the high level seen in the previous month (revised November value: 130.6 points) during December 2017.

The index thus ended the year 2017 on a positive note. During 2017, the index recorded a 5.4 percent increase, which is similar to the growth observed in 2016. World trade thus seems to have found a way out of the doldrums in which it has been stuck during 2014/2015.

The index is based on data continuously collected from world container ports by ISL as part of its market monitoring. Because large parts of international merchandise trade are transported by ship, the development of port handling is a good indicator for world trade.

As many ports release information about their activities only two weeks after the end of the respective month, the RWI/ISL Container Throughput Index is a reliable early indicator for the development of international merchandise trade and hence for the activity of the global economy.

Together, the 82 ports covered in the index account for about six out of ten containers handled worldwide. The flash-estimate for December is based on data reported by 48 ports, accounting for close to 77 percent of the total index volume.

The RWI/ISL-Container Throughput Index for January 2018 will be released on 22 February 2018.