Home / Awards Funding / Reconstructing the richness of pristine oceans funded by the ERC
28.10.2019 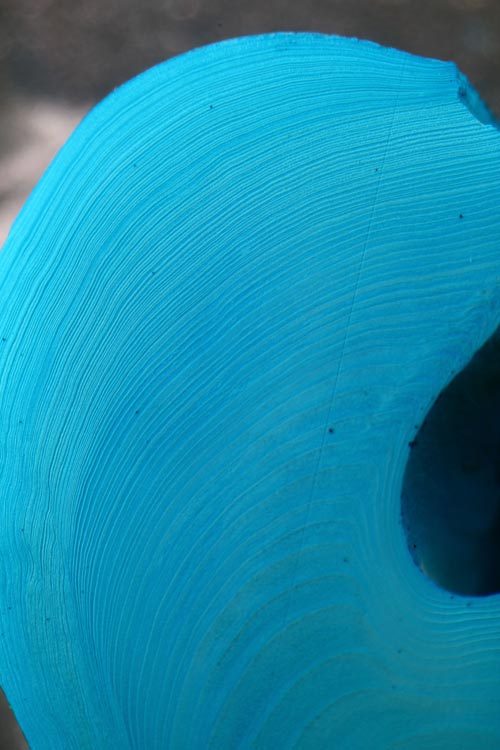 Like trees, shells form annual rings which allow the exact dating of each section of shell. Pictured here is a dyed cross-section of a shell taken from an about 120 year-old Arctica islandica clam. photo/©: Bernd Schöne, JGU

Geoscientist Professor Bernd Schöne of Johannes Gutenberg University Mainz (JGU) and his cooperation partners in Great Britain and Denmark have been awarded an ERC Synergy Grant, one of most prestigious subsidies of the European Research Council (ERC), in order to study the original ecological state of the oceans and how human influence has changed it.

The SEACHANGE project aims to reconstruct the ecological status of the oceans with their rich marine life and biodiversity before human interference began to leave its mark. The focus will be on prominent transition periods and key regions, such as the arrival of the Vikings in Iceland.

ERC Synergy Grants are awarded to particularly challenging research projects undertaken by two to four collaborating project managers with complementary expertise. Joining JGU in playing a leading role in SEACHANGE are the University of Exeter, the project's speaker university, and the University of York, both in the United Kingdom, as well as the University of Copenhagen in Denmark.

The world's oceans are subject to largely undetected changes as we are unaware of them. Marine conservation aims to restore or preserve valuable marine ecosystems. However, the starting point of current strategies to achieve this is very often an already altered state of the oceans.

“Our concepts of what ocean ecology may have been like originally are not based on facts, they are wishful thinking. We simply don't know how marine ecosystems functioned before human activity began to impact on them, how great the biodiversity was, and how large the populations of fish and other marine wildlife actually were,” said Professor Bernd Schöne.

“It is for this reason that we intend to reconstruct the original ecological status of the oceans so that we can determine how diversity and food chains have been altered due to the intensive exploitation of marine resources by humans.” The project will be focusing on major phases of the last 6,000 years that involved cultural transformations and on regions where there are already certain indications that anthropogenic changes have occurred.

During the early Holocene, hunter-gatherers founded coastal settlements in southern Scandinavia, which relied on large-scale fishing for food. One example is the Ertebølle culture, which has left behind massive kitchen middens consisting of mussel and snail shells. Around 6,000 years ago, agriculture and animal husbandry increased, while the harvesting of fish and shellfish continued and in some cases intensified.

“It would be fascinating to know whether the hunters and gatherers of the time already had an influence on the marine ecosystem and what role the transition to arable and pastoral farming played,” added Schöne.

Marine exploitation over the past 6,000 years

The existing data on the North Sea region indicates that marine exploitation increased from around 950 AD, particularly due to the Viking expansion in the north and population growth and urbanization in the south. The shell and bone middens found on the Orkney Islands provide specific evidence of this. A further intensification of fishing activity apparently occurred later, between 1600 AD and 1800 AD, in other words, before the Industrial Revolution and before fishing began on an industrial scale.

While some transition phases are characterized by a gradual shift, the settling of Iceland by the Vikings in the year 874 AD brought about an abrupt change. Apart from the presence of a few Christian settlers from Ireland, the island was previously largely uninhabited. “What we have here is a changeover from an area in pristine condition into one that underwent intense fishing by the Vikings,” Schöne added, describing the initial situation.

The effect this had on the biodiversity and food chains in Icelandic waters is still unclear. Further projects will investigate the ecological impact of the sudden introduction of commercial whaling in the western Antarctic in 1904. The researchers will also explore whether the waters and aquatic wildlife around the coast of Queensland had already been influenced by the Aboriginal population before the arrival of European settlers.

Mainz team to employ an innovative method of isotope analysis

The scientists will study the collected shell and bone waste as well as marine sediments and the fossils they contain. The samples will be dated and analyzed using paleontological and molecular biological techniques. One of the Mainz group's contributions is a new, innovative method of isotope analysis:

The carbon and nitrogen isotope signatures of single amino acids in bivalve shells and the skeletal remains of other animals provide information on each organism's position in the food chain. The data will be eventually integrated in an ecosystem modeling system to clarify whether mankind or the climate is responsible for detected changes to marine ecosystems.

“Due to the lack of data, we simply don't know about the original ecological status of the oceans. We don't know what effect fishing, trawling, and pollution have had on the diversity and food chains in the ocean, or what role climate plays,” Schöne summarized. Observation periods usually have a duration of a few decades only and are therefore simply not long enough to reveal the condition of the oceans from the time before humans began intensively exploiting them.

The SEACHANGE partners hope that their research will give them a better understanding of how the oceans have evolved in the past so that they can more thoroughly understand the man-made changes involved and, if necessary, introduce measures to counteract these. It is the first project focusing on marine food chain development over such an extensive period of time.

ERC Synergy Grants are the largest funding scheme in terms of awarded funds of up to EUR 10 million, in exceptional cases up to EUR 14 million for six years. In this round, 37 projects were funded based on proposals of two to four principal investigators. The funding is awarded strictly on the basis of scientific excellence of the research topic and the team that has to have already demonstrated outstanding work.

The JGU group of Professor Bernd Schöne has been granted some EUR 3 million to fund their contribution to the “Quantifying the impact of major cultural transitions on marine ecosystem functioning and biodiversity” project.

Schöne studied Geology and Paleontology at the University of Göttingen and obtained a doctorate in the field of paleo-ecosystem research. He researched the reforestation of the Swiss Alps supported by a scholarship of the German Academic Exchange Service (DAAD) and received a Feodor Lynen research scholarship for his work on analyzing the ecological impact of dams along the Colorado River in Arizona. He worked in Tokyo with a scholarship of the Japan Society for the Promotion of Science, before the Emmy Noether Program and a Heisenberg Fellowship brought him back to Frankfurt. In 2006, he was appointed Professor of Paleontology at Johannes Gutenberg University Mainz.

Images:
http://www.uni-mainz.de/bilder_presse/09_geowiss_palae_erc_synergy_grant_schoene…
A fresh catch from 100 meters of water off the Faroe Islands: In addition to scallops, the Arctica islandica clam is the most prevalent here, a marine bivalve living for up to 500 years. Their shells provide a detailed record of changes to the ecosystem.
photo/©: Bernd Schöne, JGU

http://www.uni-mainz.de/bilder_presse/09_geowiss_palae_erc_synergy_grant_schoene…
Like trees, shells form annual rings which allow the exact dating of each section of shell. Pictured here is a dyed cross-section of a shell taken from an about 120 year-old Arctica islandica clam.
photo/©: Bernd Schöne, JGU