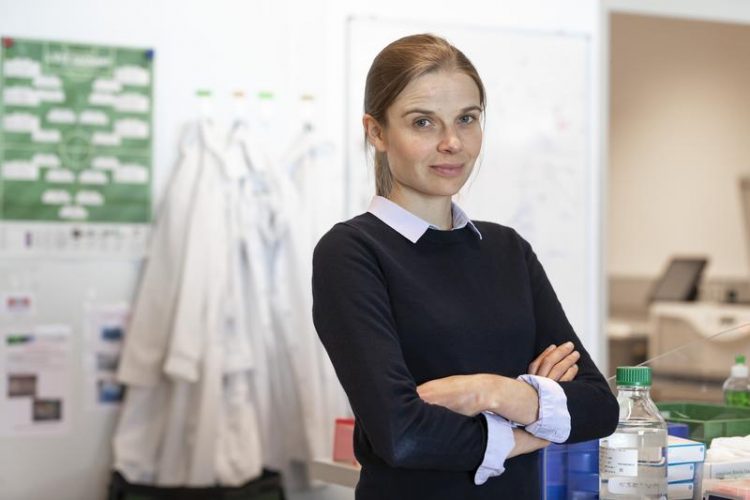 In contrast to acquired immunity and its targeted, but slow, production of antibodies against specific pathogens, innate immunity reacts immediately: by means of special sensors the cell is able to check whether any DNA or RNA is in the wrong place.

As this can be a sign of viral infection, the cell triggers an overall antiviral immune response. The medical researcher Andrea Ablasser has been investigating how such innate immune responses are controlled, and in doing so, has come upon a promising new therapeutic approach. On behalf of the Latsis Foundation, the Swiss National Science Foundation has awarded her the National Latsis Prize 2018 in recognition of her pioneering work.

Ablasser's research focuses on the so-called cGAS/STING signal pathway, which was only discovered ten years ago. This signal pathway, which is activated if DNA is present outside the cell nucleus, mainly boosts the production of inflammation signals, which in turn activate various immune cells that fight viruses.

The signal pathway also plays a role in the immune response to tumour cells. Having already done research in this field as an undergraduate and later as a doctoral student, Ablasser was able to characterise an important transmitter substance in this chain of signals while working as a postdoc at the University of Bonn. “It was during this period that I decided to devote myself entirely to basic research instead of doing clinical work, which would have been the obvious choice as I had studied medicine,” says Ablasser.

Since accepting the professorship at EPFL, Ablasser has mainly been investigating what happens when the cGAS/STING signal pathway is falsely activated, causing health problems. This always happens when the body's own DNA escapes from the nucleus of the cell due to stress, illness or cell ageing, and the DNA sensor mistakenly reacts.

“The clinical importance of this field has been one of the reasons for its rapid development,” says Ablasser. She has devised experiments to find out how such an error by the cGAS/STING signal pathway can cause illnesses such as chronic inflammation, autoimmune disorders and neurodegenerative disorders.

Her ideas for new experiments often come from chance observations: “If an experiment isn't going as you expected, it is often worth taking a closer look. You never know what you will find. But you also need to have a good team – one that can think on its feet.”

The discovery that the cGAS signal pathway, if overactive, can cause chronic inflammation and other diseases prompted Ablasser to screen for a substance that inhibits this process. “Such screenings are considered risky because they involve a lot of work, and there is no guarantee of getting useful results.” But in this case she was lucky. Out of 60,000 molecules, she was able to filter out one small agent that very specifically inhibits a component of the cGAS/STING pathway. The therapeutic potential of this inhibitor now has to be tested in various disease models, and Ablasser recently co-founded a start-up company to do precisely that.

In her own work she wishes to focus more on basic research again. She is currently particularly interested in the link between cell ageing and innate immunity: “My aim is to gain a better understanding of age-related diseases such as pulmonary fibrosis or the loss of blood-building stem cells.” Because – as her research until now clearly shows – a fundamental understanding of cellular processes marks an important step in the development of successful new treatments.

Andrea Ablasser was born in Bad Friedrichshall in 1983. She finished her studies in human medicine at the Ludwig-Maximilians University in Munich in 2008 and obtained a doctorate in clinical pharmacology at the same university in 2010. She continued her work on innate immunity at the Institute of clinical chemistry and pharmacology of the University of Bonn. In 2014, she was appointed as a tenure-track assistant professor at EPFL. She has already received a number of prizes for her research work, most recently the 2018 Eppendorf Award for Young European Investigators.

But work doesn't really feel like work to Ablasser. She considers it a privilege to be able to do research in a place like Lausanne. She lives in a small village not far from the town with her fiancé, the physics professor and Latsis laureate 2014, Tobias Kippenberg. In her free time, she goes running or heads off for the mountains on her road bike.

The National Latsis Prize has been awarded annually since 1983 by the SNSF on behalf of the International Latsis Foundation, a Geneva-based non-profit organisation that was founded in 1975. The Prize is awarded to researchers in Switzerland who are under 40 years of age. Endowed with prize money of CHF 100,000, it is one of the highest scientific honours in Switzerland. Furthermore, four Latsis University Prizes worth CHF 20,000 each are awarded by the universities of Geneva and St. Gallen as well as by ETH Zurich and EPF Lausanne.

The 35th prize ceremony will be held on 10 January 2019 at the Rathaus in Bern. Media representatives can register by sending an email to: com@snf.ch

The text of this press release, downloadable images, a video portrait of Andrea Ablasser and further information are available on the website of the Swiss National Science Foundation: