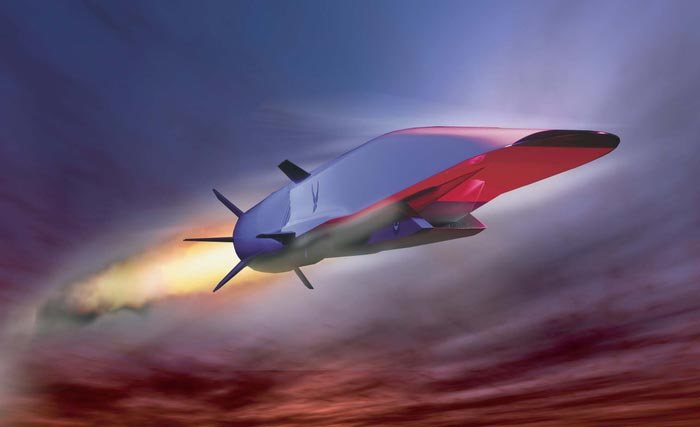 A team led by University of Arizona aerospace and mechanical engineers has been selected for the first round of funding from a national hypersonics consortium.

The University Consortium for Applied Hypersonics awarded its first round of funding, totaling $25.5 million, to projects that advance the field of hypersonic flight, in which vehicles travel upwards of five times the speed of sound.

Samy Missoum, a professor of aerospace and mechanical engineering at the University of Arizona, received $1.5 million to lead the development of a surrogate aerodynamic database, an essential tool in the design of next-generation hypersonic systems. Co-investigators from the Department of Aerospace and Mechanical Engineering are Alex Craig and Jesse Little, who specialize in wind tunnel experiments, and Kyle Hanquist and Hermann Fasel, who specialize in hypersonic simulations. Michael Chertkov, chair of the Program in Applied Mathematics at UArizona, will provide expertise in physics-informed machine learning. The group is also partnering with Raytheon.

“Hypersonics is an area of strategic priority for the University of Arizona, and this funding reflects our position as a national leader in the field,” said University of Arizona President Robert C. Robbins. “We are proud to have a strong team of faculty members working closely with Raytheon and partner institutions to further advance this fast-growing field of critical importance to national security.”

Established in 2020, the University Consortium for Applied Hypersonics is a collaboration among academia, government and industry that aims to deliver the workforce and research for modern hypersonic flight systems in support of national defense. UArizona is among the consortium’s 87 member universities. The consortium also has 90 industry partners, including Raytheon, and eight national laboratories. The first round of funding was highly competitive.

“As leaders in the hypersonic industry, our partnership with the UCAH is designed to inspire and train the nation’s next generation of hypersonic engineers,” said Wes Kremer, president of Raytheon Missiles & Defense. “Our investment in digital engineering tools like the surrogate aerodynamic database will accelerate the development and delivery of hypersonic technologies to the warfighter.”

Hypersonic vehicles travel at Mach 5, about 3,830 mph at sea level. Vehicles traveling at such high speeds experience tremendous heat and pressure. To test how a vehicle responds under specific conditions, such as speed and angle of attack, engineers and researchers typically set the desired parameters and run wind tunnel experiments and simplified computations. The results are used to form an aerodynamic database that indicates what forces a vehicle will experience in that configuration. However, wind tunnel tests are expensive to run, and computations do not accurately capture all the relevant flow phenomena.

“Say a scientist wants to estimate the maximum temperature or force on the vehicle under conditions that have not been already tested,” said Missoum, director of the university’s Computational Optimal Design of Engineering Systems Laboratory. “If you wanted to test several configurations, it would become very time consuming and expensive. This problem becomes even more pronounced as the number of parameters to characterize the hypersonic system increases. The idea of a surrogate aerodynamic database is to allow one to efficiently predict the behavior of a hypersonic vehicle without the need to run a wind tunnel experiment or an expensive computer simulation.”

Missoum’s machine learning and statistical techniques will be key to the construction of the database. It will be constructed by selecting, from a very large number of possible choices, the most useful configurations to run and the computations or experiments that will be most informative.

“The methods we’re proposing will inform which configurations to test, such as which Mach number and angle of attack,” Missoum explained. “Once the configuration has been selected, the approach will recommend how to test that case – which type of computer simulation is needed, or whether wind tunnel testing is, in fact, necessary.”

In addition to the computer simulations used to model the complex flow in hypersonic flight, the researchers will develop physics-informed machine learning models to further allow for the construction of the database.

The surrogate aerodynamic database will also provide an estimated uncertainty level associated with its predictions. This is critical because small perturbations of the parameters can lead to large changes in the behavior of a hypersonic system. The database construction will consider various sources of uncertainty, including those associated with wind tunnel measurements and computer simulation predictions.

“The multidisciplinary nature of this work is remarkable,” Missoum said. “Skills from the computational design and machine learning communities migrate to the field of hypersonics to deliver techniques and tools useful to researchers and practitioners alike. I’m really excited because it has the potential to be transformative for the hypersonics community.”