For a better climate in the cities: Start-up develops maintenance-free, evergreen moss façades 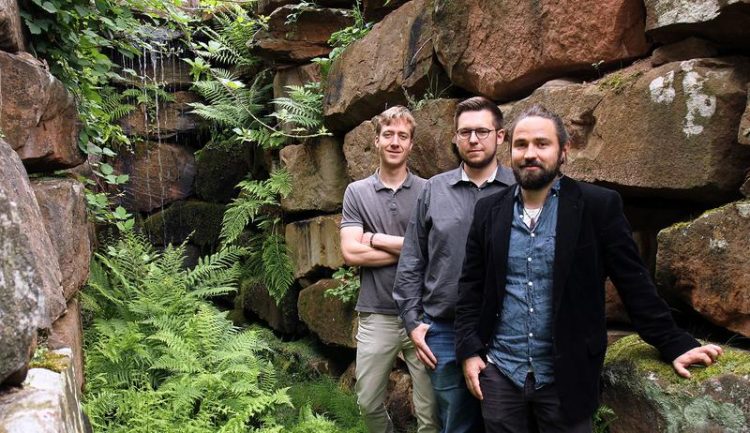 Around 400 million years ago, mosses formed on Earth. Unlike other plants, they do not have roots. “They filter their nutrients out of the air,” says botanist Dr Tobias Graf, who has been researching these plants for a long time. “Back then, there was a series of volcanic eruptions that released a lot of ash into the atmosphere.

“Mosses have taken advantage of this to supply themselves with nutrients.” Even today they filter fine dust and CO2 from the air. They also grow in many places in the city – without human involvement, just because the ecological conditions fit.

The idea was that what works in nature should also work when artificially produced, Graf thought. Thus, the idea to start a company was born. Together with his two colleagues, information electronics technician, business information scientist Björn Stichler and civil engineer Martin Hamp, he has developed a façade that is maintenance-free and self-seeding. They named their technology BryoSYSTEM. The name derives from the Latin word for moss – Bryophyta.

The smallest unit consists of a concrete element about one metre high, 15 centimetres wide and only a few centimetres deep. It can be easily attached to the walls of buildings, for example. At its top, there is a solar cell, but other energy supply sources are also possible. On the ground there is a water tank in which the technology is stored and which can be installed in the ground.

In order for mosses to grow on surfaces, the elements have special structures on which young moss plants can develop optimally. “At the top of the elements there is a semicircular recess through which watering takes place. The bordered grooves ensure that the water is evenly distributed,” explains Hamp about the technology. Rainwater collected in a cistern can be used for this purpose.

What is special: The façade elements do not have to be planted in advance. The founders pre-treat their façade elements with a special mixture so that mosses can establish themselves more quickly. Everywhere in the air there are spores of mosses. These can easily settle and find ideal growth conditions.

“The plants are accustomed to the prevailing climate and do not have to adapt. In addition, mosses do not require any further cost-intensive care such as plant protection or pruning – which is a disadvantage of previous façade greening,” says Graf.

Compared to other plants that are currently used for façade greening, mosses are green all year round. “They're most comfortable at cooler temperatures,” he continues. “When it gets too hot in summer, they fall into a kind of sleep, a dormancy.”

The BryoSYSTEM has numerous sensors which monitor humidity and other environmental parameters and send such data to a measuring device. “Using an algorithm, this device adjusts plant nutrition according to weather conditions,” says Stichler. “Moreover, such data is exciting for future smart city concepts,” he continues.

“For example, we want to find out how much CO2 and fine dust the plants absorb. Cities that use the system in public buildings, for example, could use these figures for their advertising.” With their technology, they not only help to counteract air pollution in cities, but also increase biodiversity. In addition, the mosses can serve as rain storage and noise protection.

In the long term, the founders are also planning moss walls in tunnels and underground stations. “If they are irradiated with an artificial light source, they can also live there and help, for example, to clean the air of pollutants,” explains Graf.

The founders have applied for a patent for their system. On their way to independence, they are supported by their two mentors, Professor Dr Marcus Rühl, who researches construction and design at Hochschule (HS) Kaiserslautern, and Professor Dr Burkard Büdel, emeritus, who spent many years researching mosses and lichens at Technische Universität Kaiserslautern and is an internationally renowned expert in this field.

In addition, the start-up office of TUK and HS as well as the Bito-Campus start-up centre in Meisenheim support the young company. They have also received a twelve-month Exist Scholarship from the Federal Ministry of Economics amounting to approximately 145,000 euros.

The founders are looking for partners and first customers to realize pilot projects. This year, they took first place in the Rhineland-Palatinate ideas competition.
They are also looking for committed employees who are interested in making cities greener.

Further information can be found at www.artificial-ecosystems.com