Aspern: The City Next Door 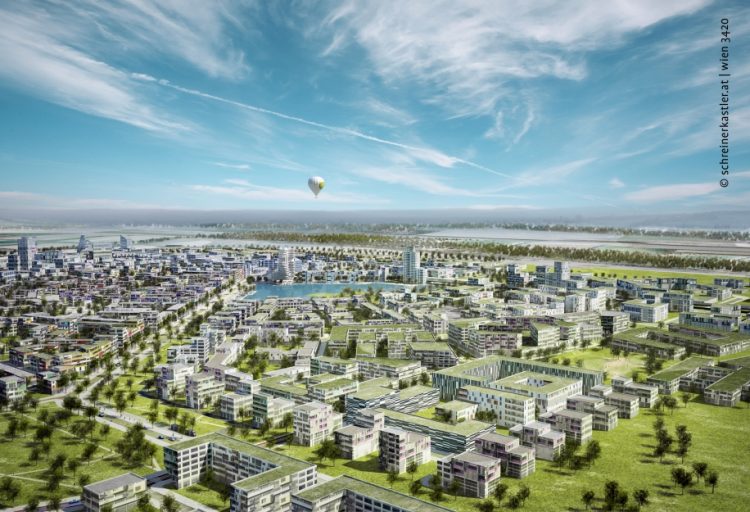 A former airfield on the northeastern outskirts of Vienna, Austria is providing a test bed for technologies that could make cities increasingly energy efficient. Today, approximately two years after construction began, the airfield has been transformed into a small city – perhaps the first ever to be built so that scientists and urban planners can learn how buildings, renewable energy sources, local electrical distribution networks, and the entire grid can optimize their interactions in order to maximize their efficiency and minimize their collective energy use.

Known as “Aspern – Vienna’s Urban Lakeside,” this new citadel of technology could be important for cities everywhere because, if the battle to contain climate change is to be won, it will be fought in cities, which is where 75 percent of the world’s energy is consumed and 85 percent of its greenhouse gases are produced.

At 240-hectares, Aspern is one of Europe’s biggest urban development projects. Already, it includes approximately 3,420 apartments, part of a school campus, dormitories, and a research center for the analysis of advanced manufacturing technologies (see insert).

By 2028 it is scheduled to have around 8,500 apartments, 20,000 jobs, and a commercial campus – all within a 25-minute subway ride from downtown Vienna and a 28-minute train trip to Bratislava’s central station in the Slovak Republic.

Aspern is not just another big real estate development project. What sets it apart from dozens of other major projects around the world is a € 40 million joint venture (JV) between the City of Vienna, the city’s utility companies (Wien Energie and Wiener Netze), and Siemens – the only industrial partner involved in the project.

Indeed, a coordinated research plan driven by Siemens Corporate Technology (CT), and the company’s Energy Management and Building Technologies divisions calls for the city to be a test bed for the integration of technologies that support energy efficiency and sustainable urban development.

Already Number 1 on the UN’s Livable Cities Index and heading the list of “The Top 10 Smart Cities on the Planet,” Vienna wants to learn how to further reduce its environmental footprint. But meeting that goal in a meaningful way calls for it to objectively determine its current level of energy efficiency, which is the first step on the road to measuring improvements over time.

And that’s exactly what Siemens is aiming for in Aspern. The company has assembled a three-part package, the essential components of which are technologies for power management in smart buildings, solutions for the low voltage grid – the electrical distribution system from transformers down to individual buildings and apartments – and solutions for managing “big data” that include the establishment of a City Data Center.

Unlike virtually any other large-scale urban development project, in Aspern all of the elements in these systems – regardless of manufacturer – must be able to communicate with one another in the interest of sharing data.

At 240-hectares, Aspern is one of Europe’s biggest urban development projects.

But overcoming this challenge has a price – at least in terms of initial capital outlays. That’s why the Aspern JV is covering the difference in cost between conventional and smart components – as well as the installation of many renewable energy systems – and why such systems are being installed in only a representative selection of Aspern buildings. In order to maximize what it can learn about energy use optimization, the JV is therefore supporting installation of different “mixes” of technologies ranging from photovoltaic panels and heat pumps to a variety of energy storage solutions. Aside from optimizing energy use in buildings themselves, this research is being focused on the potential of buildings to flexibly generate energy for the grid. In order to accomplish this goal, two systems are required. The first is an onboard Building Energy Management System (BEMS) that calculates a building’s electricity use and level of energy flexibility at regular intervals. The second is an Energy Pool Manager that acts as an interface between individual buildings and an electricity exchange system.

With the express permission of more than 100 households, data for this research is now being generated. The data, which covers factors such as power consumption, air quality and room temperature, is collected and linked with data from the power grid, as well as real-time weather and public event-related information. In addition, Aspern’s new low voltage grid, which consists of twelve grid stations and 24 transformers, is equipped with a network of sensors for real-time measurements of its behavior. Eventually, all of the data generated by the above systems will flow into a City Data Center. All in all, by analyzing the most efficient mixes of technologies and their influence on end-user behavior, the Aspern JV expects this advanced combination of IT infrastructures to shed light on the correlations among underlying systems with a view to optimizing a wide range of services.

Understanding those correlations will, however, pose significant challenges in terms of interpretation. For instance, monitoring of the low voltage grid is basically a new area of research. Indeed, scientists are already beginning to evaluate the data generated by building systems in order to understand the relationships between variables and the factors affecting both the grid and the buildings. That, in turn, calls for the development of specialized algorithms capable of making sense of the new data. The resulting information will be particularly important because plans call for a high level of integration of renewable energy systems. Researchers will therefore be analyzing how different energy sources, working in different mixes, and under changing weather conditions will affect the grid and buildings – a line of research designed to lead to forecast optimization and steadily improving levels of energy efficiency.

Among the many unique features of Aspern’s “living lab” concept is that the cost efficiency of its electrical grid will not be based on a classic demand-response system. Instead, the idea is to maximize local generation, storage, and energy use. After that, the next level of research will focus on enhanced interaction of local generation and demand with the smart, low voltage grid, which will open the door to energy coordination between buildings and the grid.

Thus, in buildings equipped with energy-saving technologies from Aspern’s joint venture, a building management system will coordinate energy supply from photovoltaic or solar-thermal systems to the building’s heat pumps. Such systems will accomplish this by including data from energy forecasting, generation, and storage management – a huge data integration challenge.

In short, Aspern is on the road to becoming a very important proof point for smart grids – a living laboratory in which buildings, production plants and multi-modal energy systems are integrated, and a final proof of concept that the smart city really can work.