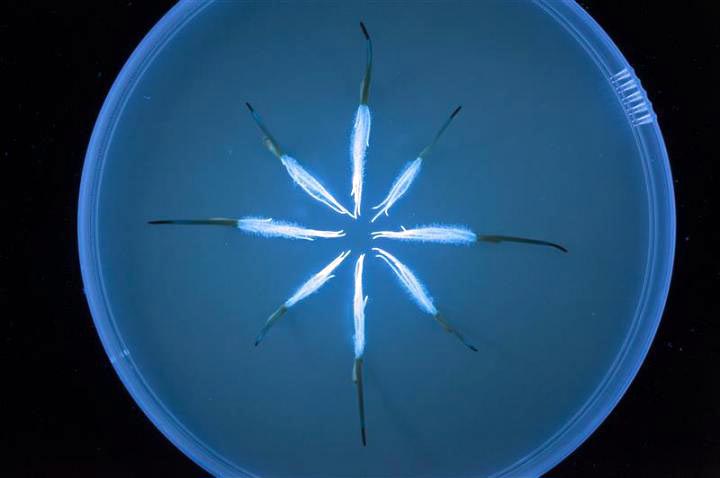 Young oat seedling roots glow under UV due to the accumulation of the antimicrobial triterpene avenacins. Oats naturally produce avenacins exclusively within the root tip epidermal cells, which protects them from soil pathogens.
Image supplied by researchers in the Osbourn laboratory at the John Innes Centre

Researchers have traced the remaining last steps of the biological pathway that gives oats resistance to the deadly crop disease take-all.

The discovery creates opportunities for new ways of defending wheat and other cereals against the soil-borne root disease.

The research team have already taken the first step in this aim by successfully reconstituting the self-defence system in the model plant Nicotiana benthamiana.

Further experiments to establish the avenacin biosynthetic pathway in wheat’s more complex genome, to test if it will provide the same resistance to take-all and other diseases, have already been initiated in collaboration with the National Institute of Botany (NIAB) in Cambridge.

The research by CEPAMS – a collaboration between the John Innes Centre and the Chinese Academy of Sciences – also delivers fresh insights into the mechanisms that shape genome architecture and adaptive evolution in plants.

Avenacins are antimicrobial compounds synthesised in the roots of oats where they offer protection against soil-borne diseases such as take-all. This fungal pathogen causes huge yield losses in wheat and there is no effective means of control.

Wheat and other cereals and grasses do not make these compounds but a better understanding of how they are produced in oat will give crop scientists knowledge they need to create disease resistant lines of wheat using modern technologies.

Here, using a genomics-driven approach, with sequencing carried out by Professor Bin Han’s group at the Chinese Academy of Sciences, the team elucidated the complete pathway, encoded by 12 genes.

They found that genes are clustered next to each other in the genome like beads on a string and organised along the chromosome approximately in the same order as the biosynthetic pathway – like a recipe written out in order of ingredients.

The team speculate this may be because gene mutations in the late avenacin pathway can result in the accumulation of compounds that negatively affect plant growth while mutations in the early pathway genes do not.

The orientation of these late pathway genes away from the telomere region means the plant is less likely be affected by toxins.

Comparison with the sequenced genomes of other cereals and grasses revealed that the avenacin cluster has formed since the divergence of oats from these other plant species which, the researchers presume, is due to a particular set of selective pressures.

Professor Anne Osbourn, joint corresponding author of the research along with Professor Bin Han said: “Our investigations show that plant genomes are able to shuffle and evolve their genes to enable them to adapt to particular stresses – in this case to soil-borne fungal diseases such as take-all. During this process, winning combinations of genes that provide a selective advantage can be recruited and relocated from around the genome and assembled into a cluster like beads on a string. This clustering will enable the winning gene-set to be passed on from generation to generation and mitigate against incomplete inheritance of the pathway genes with associated deleterious effects.”

The study offers the latest example of plant biosynthetic gene clusters for different types of compounds including drugs.

Investigations of how widespread these types of genomic organisations are in the Plant Kingdom hinges on the generation of new genome sequences for a wider variety of plants.

This should be made possible with the onset of new large-scale genome sequence initiatives such as the Earth BioGenome and Darwin Tree of Life Projects.

The study: Subtelomeric assembly of a multi-gene pathway for antimicrobial defense compounds in cereals, appears in Nature Communications http://dx.doi.org/10.1038/s41467-021-22920-8