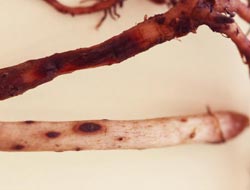 Bananas are a major food staple for about 400 million people in the tropical and subtropical regions of Asia, Africa and Latin America. However, banana yields worldwide are severely threatened by pests.

Dirk Hölscher from the Max Planck Institute for Chemical Ecology in Jena, Germany, and an international team of researchers have discovered that some banana varieties accumulate specific plant toxins in the immediate vicinity of root tissue that has been attacked by the parasitic nematode Radopholus similis.

This local accumulation is crucial for the plant’s resistance to this pest organism. The toxin is stored in lipid droplets in the body of the nematode and the parasite finally dies. These findings provide important clues for the development of pest-resistant banana varieties. (Proceedings of the National Academy of Sciences USA, December 9; 2013, DOI 10.1073/pnas.1314168110)

Bananas are among the world’s most important food crops. Dessert bananas are produced primarily for homegrown consumption in China and India and for export to the northern hemisphere in Latin America. In Europe, they represent the most popular tropical fruit. Plantains (a type of cooking banana) are important components of daily meals in Africa and Southeast Asia. They are highly prized because of their high contents of nutrients, such as potassium, magnesium and vitamins B and C.

Apart from fungi and insects, the parasitic nematode Radopholus similis is considered a major banana pest. It attacks the roots of banana plants, causing slower growth and development of the plant and fruit. In the final stage of the disease plants topple over − often when already bearing an immature fruit bunch. Yield losses up to 75% can be the result of R. similis infestation. In order to control such pests in banana plantations, high doses of synthetic pesticides are used which not only cause ecological damage, but can also have severe negative effects on the health of people who are exposed to these chemicals.

Scientists at the Max Planck Institute for Chemical Ecology and their colleagues from universities in Leuven (Belgium), Jena, Kassel-Witzenhausen, Halle, Bonn and Bremen, as well as the Leibniz Institute for Natural Product Research and Infection Biology and the Leibniz Institute of Photonic Technology in Jena have now taken a closer look at the plant-nematode interactions in the context of resistance versus susceptibility. They compared two banana varieties, a resistant and a susceptible one, and studied their defense responses to Radopholus similis.

The researchers used modern spectroscopic analysis and imaging techniques and were able to identify and localize defense substances in banana roots: The plants accumulated so-called phenylphenalenones only in infected regions of their roots, but not in healthy tissues. This was the case in both the resistant and the susceptible banana variety. The concentration of the most active compound anigorufone, however, was much higher in the immediate vicinity of lesions on the roots of resistant bananas in comparison to infected root tissues of the nematode susceptible banana plants. “The production of the toxin alone is not responsible for the banana plant’s resistance to nematodes. It is the differential concentration in specific regions of the roots, which is particularly high at the precise location of the nematode attack, which makes the difference and confers resistance. We measured far higher concentrations of the toxin in these localized regions in the resistant banana variety,” Dirk Hölscher summarizes the results.

Lipid droplets containing the active compounds visible in the nematode

The toxic effect of anigorufone and other substances was tested on living nematodes. It turned out that it was in fact anigorufone which was most toxic to the pest organism. By using imaging techniques, the researchers were able to visualize the plant toxin within the body of the roundworm. There the lipid-soluble anigorufone accumulated in lipid droplets which increased in size as they converged and finally killed the nematode. Why these complex lipid droplets are formed and why the nematodes cannot metabolize or excrete the toxin still needs to be clarified. However, it is likely that the growing lipid droplets displace the inner organs of the nematode causing an eventual metabolic dysfunction.

The scientists will now try to find out how resistant banana plants biosynthesize and translocate the defense compounds on a molecular level. Such insights will provide important clues for the development of banana varieties which are resistant to the nematodes. This could help to minimize the excessive use of highly toxic pesticides in banana plantations which jeopardize the environment and people’s lives. [AO]