Home / Agricultural and Forestry Science / Team of researchers in Vienna has decoded the structure of the ribonucleoprotein (RNP) of rabies virus
29.07.2019 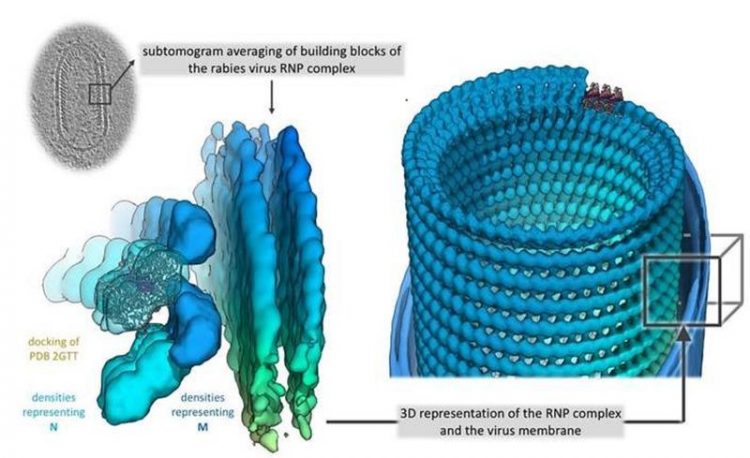 The WHO estimates the annual human death toll to be more than 55,000. The RABV particle consists of a cell derived membrane, in which multiple copies of the surface glycoprotein are anchored, and a helical ribonucleoprotein (RNP), which forms a conical tip at one end.

Although the individual components of the RNP had already been known, the exact structure of an intact RABV-RNP complex had not yet been identified.

Using cryoelectron tomography, an imaging procedure allowing for the three-dimensional representation of the smallest biological structures, and a subsequent computer-assisted analysis by subtomogram averaging, a research team of the University of Veterinary Medicine Vienna around Christiane Riedel, the study’s first author, and Till Rümenapf, the study’s last author, has now succeeded in doing exactly that.

The virus structure consists of a right-handed helix, with the 3’-terminal end of the genome located in the RNP cone, as observed in the related Vesicular stomatitis virus (VSV). Vesicular stomatitis is a virus disease with a mild course that mainly affects hoofed animals and may cause flu-like symptoms in humans.

“In RABV, interactions between M- and N-proteins are responsible for the connection of neighbouring helical turns, while M-M interactions have been described for VSV. This results in a greater distance between the helix turns compared to VSV and, thus, in a shallower angle between the individual RNP turns and the central virus axis.  This shows a surprising structural variability of the RNP when comparing VSV and RABV, although the crystal structures of the individual components that had already been determined, i.e. the N- and M-proteins, are highly homologous. To put it differently: Although the individual components of RABV and VSV are very similar, there are significant differences in the architectures of the RNPs of the two viruses,” explains Christiane Riedel.

Artificial Light Affects Plant Pollination Even During the Daytime

17.03.2021 / Agricultural and Forestry Science
Back to the Homepage