Salvage logging is often a pretext for harvesting wood 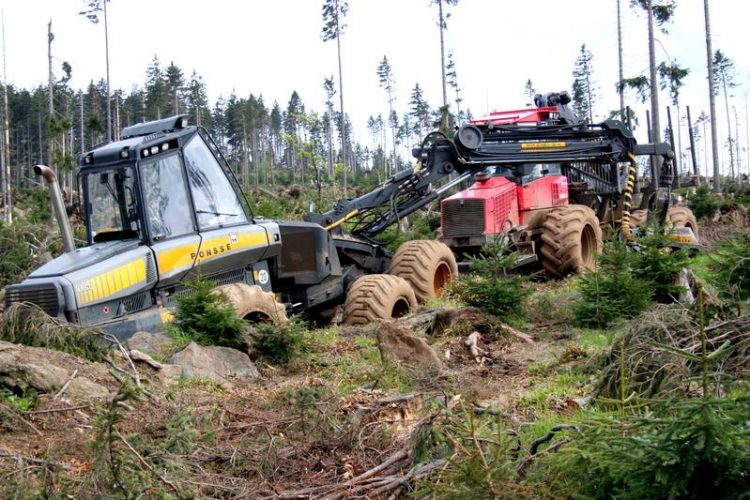 Białowieża Forest in Eastern Poland is one of the last remaining primeval forests in Europe. For the time being. In 2017, the Polish government had 100,000 more trees logged than previously, despite the fact that large areas of the Natural World Heritage site are under strict protection.

They did this under the pretense of preventing the bark beetle from spreading further. The motor saws are quiet now after protests from environmental activists, Europe-wide criticism in the media and concerns by the European Commission. The case has been handed to the European Court and the minister of the environment was sacked.

But this case is not an exception. Professor Jörg Müller wonders why politics and the media have singled out Poland as the culprit: “Unfortunately, such salvage logging activities in protected forests are on the rise worldwide.” Together with colleagues from the University of Würzburg he wrote a policy perspective recently published in the journal “Conservation Letters” which details that this practice is common also in Germany, other European countries and Asia, making it a global problem.

For their study, the members of the Würzburg Biocenter collated 42 case studies from 26 countries and interviewed local experts about the reasons and responsibilities of salvage logging. “Contrary to what is often communicated to the public, the main motivation for logging in protected areas is economic profit – pest control comes only second,” Müller explains.

The forest ecologist is in charge of the Field Station “Fabrikschleichach” of the University of Würzburg. Situated in the heart of the Steigerwald forest, the station's focus is on forest ecology, natural preservation biology and applied biodiversity research.

Salvage logging makes sense in areas where wood production is the priority in order to harvest wood while it is still usable. It is, however, not necessary for the forest's biodiversity and regeneration capacity. Especially disturbances such as storms and bark beetle infestation create valuable forest habitats for many endangered species. “They are drivers of increased species variety and structural diversity,” Müller says.

Problem not sufficiently appreciated by IUCN and FSC

According to Müller, salvage logging is often simply a pretext for harvesting wood. He says: “They deliberately capitalize on the lack of knowledge in the population regarding natural disturbances.” While many people advocate the conservation of green, mature forests, chaotic forest landscapes are considered as in need of sanitation. As a result, society even accepts the use of large machinery in protected areas in many places.

A lot of endangered forest species would find vital refuge in such areas. “We were surprised at how regularly these areas are cleared in conservation areas,” Müller says. Also, the researchers were astonished to find that the IUCN (International Union for Conservation of Nature) and the FSC (Forest Stewardship Council) don't seem to appreciate this problem either.

“There are no guidelines for protected area management by the IUCN, nor is the subject of 'reasonable management of naturally disturbed areas' part of the FSC certification process. As a result, local forest managers, who frequently oppose economic interests in wood, often find themselves isolated,” Müller explains.

Müller and his colleagues have developed concrete recommendations based on their paper to promote new policies for managing post-disturbance areas. Firstly, the practice of salvage cutting should be banned completely from protected areas, unless there is a risk of personal injury or loss of property. “It would surely make sense for the IUCN to revise its guidelines in this respect,” Müller says and he adds: “There are many national parks in Germany that include forests where disturbances are very likely to occur over the next years. It is crucial to develop an enhanced protected area management based on our present ecological knowledge.”

Another recommendation of the Würzburg ecologists is also a field of work which they will continue to push on: “We need more integrated studies on the economic and ecological impacts of salvage logging and its acceptance in society,” says Simon Thorn, who also works at the field station. Moreover, these evaluations should improve forest management planning. In future, disturbance areas need to be explicitly included in the planning process, before disturbances actually occur. This is, however, a complex task to implement and requires government funding.

Besides concrete actions in forests, politics and the industry, the Würzburg researchers point out another important angle: the knowledge about forests as an ecosystem. “Pupils as well as students of forestry, biology and environmental protection programmes should already learn about the positive effects of disturbance areas and the negative impacts of excessive salvage cutting in forest ecosystems,” Müller says and he adds: “Maybe humans need to learn to trust nature again. We also see this in our biology students in Würzburg.”