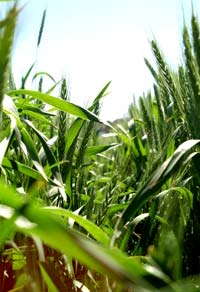 CSIRO is breeding new ’high-vigour’ wheats so fast-growing they can out-compete weeds while maintaining high yields.

“In field trials where wheat crops have to compete with weeds, the high-vigour wheat yielded double the grain of current varieties.”

They also have more robust root systems than current varieties, enabling them to starve weeds and access water and nutrients deep in the soil.

The high-vigour conventional breeding program follows a three-year study by CSIRO and the University of Adelaide that evaluated the competitiveness of over 200 wheat lines from Australia and around the world.

The study found that competitiveness in Australian wheat has been largely bred out over the last 100 years, as breeders focused on better grain quality and disease resistance.

“We measured a range of traits including wheat and weed seed yield, rate of leaf area development and the ability to suppress or tolerate weeds, selecting the most vigorous wheat lines for further breeding,” says Dr Gurjeet Gill of the University of Adelaide.

“The program is now breeding the high-vigour traits into commercial wheat varieties for release to growers. Varieties are expected to be available in four to five years.”

Further CSIRO research is aimed at understanding genetic control of early vigour and developing breeding strategies to improve the efficiency of selection.

11.11.2020 / Agricultural and Forestry Science
Back to the Homepage