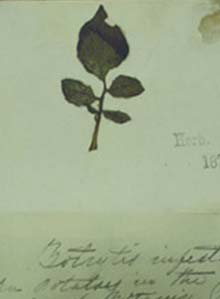 Specimen of potato infected with Phytophthora infestans collected by John Lindley in 1846 at the Royal Botanic Garden, Dublin, Ireland.

North Carolina State University plant pathologist Jean Beagle Ristaino shocked the scientific world when she published a paper in the journal Nature that called into question the then-prevailing theories about the strain of pathogen – and its place of origin – that caused the Irish potato famine in the 1840s.

Using DNA fingerprinting analysis of 150-year-old leaves – evidence that had not previously been studied – Ristaino ruled out the longtime prime suspect behind the famine: the Ib haplotype, or strain, of the late-blight pathogen Phytophthora infestans, which was presumed to have originated in Mexico.

Now, in a new study, Ristaino and postdoctoral student Kim May point the finger at the Ia strain of P. infestans, and trace its probable roots to the Andes Mountains in South America.

The study will be published in the April 2004 edition of Mycological Research.

The researchers used DNA sequences from mitochondrial DNA to examine 186 specimens from six different regions of the world dating from as early as 1845 to as late as 1982. The specimens included ones from late-blight epidemics in Ireland, the United States and continental Europe, and came from collections housed in England, Ireland and the United States.

About 90 percent of the specimens were confirmed to be infected with P. infestans, the paper reports. About 86 percent of the specimens – including those involved in major epidemics in Ireland and other locations around the globe – were infected with the Ia haplotype of P. infestans. The Ib haplotype – the one previously presumed to be the culprit behind the Irish potato famine and other epidemics before Ristaino’s groundbreaking 2001 study – was present only in more modern samples from Central and South America.

Ristaino’s lab is currently investigating the center of origin of P. infestans. She hypothesizes that the pathogen originated in South America and perhaps made its way to Europe and the United States via exports of potato seed on steamships. The data to support this hypothesis will be published by one of Ristaino’s graduate students, Luis Gomez, in the next year.

There are four haplotypes of P. infestans – Ia, Ib, IIa and IIb – which is a fungus-like pathogen that causes severe lesions on leaves of potato and tomato plants.

The late-blight pathogen led to the Irish potato famine, which killed or displaced millions of Irish people, and other epidemics across the world. Late blight continues to wreak havoc as a major potato and tomato killer, which makes Ristaino’s research all the more important.

“If we can understand the strains of P. infestans that are out there now and see how the pathogen has evolved over time – including how it mutates in response to fungicides or host resistance – we’ll better be able to manage the disease,” Ristaino said.