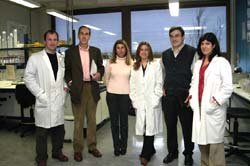 Reducing the amount of fat in lamb amongst the Navarra variety of sheep in order to breed weightier animals, suitable for market demands and with a lower production cost for the farmer, is the aim of the project being developed by a research team from Navarre Public University’s Department of Agricultural Production and Department of Health Sciences.

The Navarre breed – previously known as Rasa Aragonesa – is found in the midlands region of Navarre and the extensive Ebro river basin region in the same territory. This ovine breed has some 420,000 heads which are basically given over to the production of “ternasco” meat type of lambs, slaughtered at three months when they are about 23-25 kilos of live weight.

The fundamental reason why these lambs are slaughtered at an early age (with corresponding low weights) is to avoid an excessive fatty state which, on the one hand, increases the cost of the feeding and fattening process and, on the other, puts a brake on the sale and consumption of dressed carcasses, due to high fat content and strong ovine taste.

In fact, the need to respond to the demand for meat with low fat content has given rise to the development of methods for reducing fat levels in animals in such a way that slaughter at higher weights and with less production costs is favoured. Particularly notable amongst these methods is diet changes for the lambs and hormone administration.

Specifically, the research team at the Navarre Public University is analysing the effect on the development of fatty tissue in lambs of two substances which are common ingredients in their diet: vitamin A (retinol) and conjugated linoleic acid (CLA). The project is due to end in 2006.

One of the main aims of this project is to modulate the quantity of fat accumulated in the animal through the regulation of adipogenesis or the process by which fat is deposited in different parts of the body. The investigation into “Animal Production and Meat Quality and Technology” at the Navarre Public University, which involves a number of researchers from this project, has been concentrating precisely on this process for more than ten years.

Thus, the effect on the deposition of fat in animals of vitamin A and CLA, two natural substances found fundamentally in vegetables, was investigated. The starting hypothesis is that these substances diminish fat deposition, i.e. the development of adipocytes, but the concentrations of these substances have to be known in order to obtain the desired results.

It has been discovered that CLA is, moreover, an anti-cancerous substance. In fact, as professor Arana Navarro explains, experiments are being carried out to augment the content of this element in the animal-based foodstuffs in the diet such as, for example, milk: The more grass or forage the animals eat, the more CLA in their milk and, so, the more benefit to humans. Thus, on administering CLA directly to live lambs, a double benefit can be obtained: apart from reducing the quantity of fat, the fat that is incorporated contains a higher amount of this anti-cancerous substance.

The study will be carried out firstly in vitro, as the study on live animals is more complex and onerous. Amongst the techniques to be used, cell cultures is particularly notable, permitting summarising the adipogenesis process and investigating to see if the differences between sexes, breeds and fatty deposits are due to intrinsic cellular differences or to external factors affecting these.