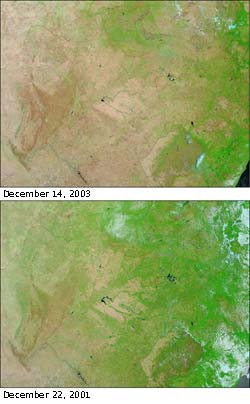 WAITING FOR MORE RAIN IN SOUTH AFRICA <br> <br>These MODIS images contrast conditions in South Africa in December 2003 with conditions in December 2001. The region is coming out of a dry winter, and a lack of rain forced many farmers to delay planting summer crops. In December 2001, bright green vegetation covers the region, but in December 2003 broad pink and tan areas of bare soil appear in its place. Many of the reservoirs, shown as black spots in these false-color images, appear to cover a smaller area in 2003 than in 2001. Credit: Jeff Schmaltz, MODIS Land Rapid Response Team at NASA GSFC

NASA and the University of Maryland are providing the FAS with observations and data products from instruments on NASA’s Aqua and Terra satellites and from the TOPEX/Poseidon, Jason and Tropical Rainfall Measuring Mission (TRMM) satellites. FAS analysts are using these products to regularly assess global agricultural conditions.

“The partnership between NASA and FAS is an example of how we extend the benefits of Earth science missions to meet the needs of our operational partners,” said Ed Sheffner of NASA’s Earth Science Enterprise.

NASA provides daily, high-quality, observations of the Earth. The timeliness and quality of these science data products are used to support decision support tools employed by FAS to assess crop productivity over large areas of the world. NASA products allow FAS analysts to distinguish between different crops such as wheat and rice and permit analysts to measure other features like surface temperature and snow cover. Analysts can gauge the health of agriculture by comparing recent and historic data. NASA satellites collect data twice daily, Terra in the morning and Aqua in the afternoon.

Frequent satellite observations are important so analysts can assess how natural disasters such as fires, volcanic eruptions, floods, storms, or even extreme temperatures, affect crops. The information is often crucial to international food aid organizations. Earth Science products quickly demonstrated their utility as they helped analysts identify and monitor new areas of irrigated agriculture in the Middle East.

NASA’s Rapid Response System processes and delivers observations to FAS usually less than four hours after it is collected. Scientists at the University of Maryland are creating an archive and an interface that enables analysts to compare current and historical conditions.

Altimetry data from the TOPEX/Poseidon and Jason satellites are used to monitor the water level of 100 lakes and reservoirs around the world. Innovative use of these data to measure lake and reservoir water levels in an operational manner has proven valuable. The information allows FAS analysts monitor the duration of droughts, assess how much water is available for irrigated farmland in arid regions and, as a result, how much of a crop the region is able to produce.

The TRMM satellite provides near real-time observations about precipitation for mid-latitudes. Rainfall has a large impact on both rain-fed and irrigated crops. TRMM data helps analysts gauge planting and growing conditions and predict the size of the harvest with greater reliability.

Applications of NASA’s Earth Science research enable the use of observations, measurements and models to improve agency partners’ decision-making capabilities. FAS has benefited from incorporating products from Earth observation systems into operational procedures.