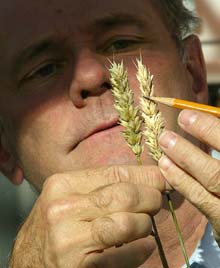 Both wheat plants displayed by Purdue agronomy professor Herb Ohm have been infected with Fusarium head blight, or wheat scab. The plant on the left was crossed with a pasture grass to create a high level of resistance to the fungus, which is one of the primary diseases affecting wheat production. (Agricultural Communications photo/Tom Campbell) <br> <br>

A western American pasture grass crossed with wheat can improve resistance to a fungus that can be toxic to plants, animals and people, according to Purdue University researchers.

Resistance genes in the grass that replaced genes in wheat increased protection against Fusarium head blight, or wheat scab, the scientists said. In the December issue of the journal Theoretical and Applied Genetics the researchers also report that they located and mapped the small bits of DNA, or markers, associated with the resistance gene in the grass, called tall wheatgrass.

“In the past 10 or 15 years, the fungus Fusarium graminearum has emerged as one of the diseases of primary concern in wheat,” said Herb Ohm, Purdue agronomy professor. “This is because the widespread practice of reduced tillage in fields provides a perfect environment for growth of the fungus.”

Reduced tillage, meaning the soil is not plowed for planting, cuts farmers’ costs and helps prevent erosion, he said. In the eastern United States, the upper Midwest and other places where large amounts of corn and wheat are both grown, Fusarium is a major problem, especially when the weather is warm and humid or rainy. Corn stalks left as natural mulch after harvest also foster fungus growth.

The fungus causes head blight that leads to major wheat crop losses. In 1996, crop losses due to Fusarium totaled at least $38 million just in Indiana, according to the U.S. Department of Agriculture.

“The disease has occurred most years since the early 1990s,” Ohm said. “Its increase in frequency and severity coincide with reduced soil tillage, along with favorable weather – warm, humid conditions – for several weeks prior to and during wheat flowering in mid- to late-May.”

The fungus also produces a mycotoxin that sickens animals and people. Pigs, cattle, horses, poultry and people can develop vomiting, loss of appetite, diarrhea, staggering, skin irritation and immunosuppression when they eat grain or hay infected by Fusarium. The most severe cases can be fatal.

Research has found evidence that these toxins may be cancer-causing. People usually ingest the fungus when they eat contaminated grains and cereals. According to the United Nations’ Food and Agriculture Organization, people in developing countries face the greatest risk from Fusarium mycotoxins.

“Fusarium production of mycotoxins is a more serious problem than wheat production loss,” Ohm said. “The toxin results in complete loss because you can’t use the grain to make food for people or livestock.”

The fungus can infect most cereal grains, including corn, wheat, barley and some oats.

Replacement of the wheat gene was done with conventional crossbreeding and selection and didn’t involve any genetic engineering. Because the two plants are closely related, the wheat is not altered, except for the added protection against Fusarium.

The newly identified resistance gene in the wheat grass is on a different chromosome in the genome than other known resistance genes used in wheat. This will enable researchers to combine the newly discovered effective resistance gene from wheatgrass with other genes that protect wheat against Fusarium. This breeding of a plant with more than one resistance gene is called gene pyramiding.

“For some diseases, such as Fusarium, a single resistance gene will not give you complete resistance,” Ohm said. “So we try to identify genes from different resistant varieties or sources that will give some resistance.

“Then we use genetics to determine whether resistance genes from two different sources are on different locations in the genome. If they are, then we can pyramid them.”

Now that Ohm and his team of researchers know they can combine the tall wheatgrass resistance gene with other resistance genes, they will try to produce a line of wheat with several genes resistant to Fusarium. The seed will then be available through the U.S. Department of Agriculture-Agricultural Research Service laboratory in Aberdeen, Idaho, that is a seed repository for wheat lines from around the world.

“The whole basis of plant breeding is to put the favorable genetic traits of different parent lines into one progeny line,” Ohm said. “Prior to the DNA era, we had to rely on characterizing plants just on phenotype (observable traits). For certain traits that’s fairly easy to do. For many traits it’s difficult because of environmental effects.

“Some phenotypes have good crop yield in one environment but not in other environments. This makes it difficult to determine which genes affect yield in one wheat variety compared to another.”

For instance, under perfect conditions, one wheat line might have a very high yield but may not in an arid climate. By using DNA to compare traits, environmental impact is not a factor because if a gene is present and activated, then scientists can ascertain if a characteristic is genetic or environmental, Ohm said. The bits of DNA known as markers allow scientists to determine more quickly whether the gene carrying the desired trait is present in a plant.

Other researchers on this study were Xiaorong Shen and Lingrang Kong, both postdoctoral fellows in Ohm’s research group.