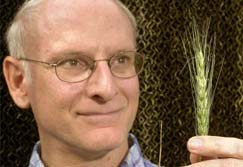 Stephen Goodwin’s wheat research may lead to a reduction in the amount of grain lost to leaf blotch. Goodwin is an associate professor of botany and plant pathology at Purdue University. (Agricultural Communications photo/Tom Campbell) <br>

Bread wheat plants carrying a newly discovered gene that is resistant to economically devastating leaf blotch can reduce the amount of grain lost to the pathogen, according to Purdue University researchers.

The scientists used bread wheat species to find the gene and the markers, or bits of DNA, that indicate presence of the naturally occurring gene. The fungus causes wheat crop damage worldwide with yield losses of 50 percent or more in some places. In the United States the disease is widespread in the Pacific Northwest, the northern Great Plains and the eastern Midwest soft wheat region, and experts estimate annual losses at $275 million.

Results of the Purdue study on resistance to the fungus that causes Septoria tritici leaf blotch are published in the September issue of Phytopathology and appear on the journal’s Web site.

“The goal of our work is to find additional resistance genes to the fungus Mycosphaerella graminicola so we can use the lines carrying these genes in our wheat to avoid the breakdown of resistance in the plants,” said Stephen Goodwin, associate professor of botany and plant pathology and U.S. Department of Agriculture-Agricultural Research Service (USDA-ARS) scientist. “Having the markers greatly speeds up the breeding process for resistant plants.”

The markers facilitate finding plants with the pathogen resistance gene. As soon as a seedling sprouts, a small piece of the young leaf can be ground and then a DNA test can be run. This shows whether the markers are present.

“Using the markers, in a few days you can tell which plants have the resistance gene and which don’t,” Goodwin said.

The researchers discovered the gene Stb8, so named because it is the eighth gene known to provide resistance to Septoria tritici leaf blotch (STB). However, this gene has some differences compared with the ones found previously, Goodwin said.

Several of the previously found genes conferred resistance on bread wheat plants for only a few years – up to about 15 years. Stb8 has genetic characteristics that may allow it to be effective for a much longer period of time, Goodwin said.

The genome containing Stb8 originated from a pasta wheat parent, which is resistant to most strains of the fungus. This may extend the usefulness of the resistance gene for bread wheat.

The specific location of Stb8 on the genome is different than all the previously known resistance genes for wheat blotch. This site should allow Stb8 to be combined with other genes that also offer some protection against the disease, thereby increasing plants’ resistance.

Stb8 and its markers are naturally occurring in wheat lines already in use, so they can be used immediately for farmers’ breeding programs to gain protection against leaf blotch, Goodwin said.

The long-term goal of the research of leaf blotch resistance genes is to learn about the molecular pathways that allow the plants to respond to pathogens, he said.

“If we can understand these biochemical processes that lead to resistance, then in the future we may learn how to modify them to make these genes more durable,” Goodwin said.

Though different resistance genes seem to work more effectively in different parts of the world, the pathogen is easily spread, especially in today’s world of fast transportation. The fungus is spread and grows by spores and it can survive in dried leaves for a very long time, Goodwin said.

“We even store them that way, sometimes for years,” he said. “If you keep the leaf dry, it won’t decay and the pathogen just sits there. Or you can freeze it at —80 C, thaw it, and then spray it with water – it will start growing.”

Leaf blotch doesn’t kill plants, but it weakens them sufficiently to cause significant crop loss. Purdue scientists determined resistance to the fungus by observing whether the disease appeared on the leaves of adult plants and by measuring the number of spores present. This particular disease seems to affect young plants and adult plants to the same degree.

The other researchers involved in this study are Tika Adhikari, USDA-ARS and Department of Botany and Plant Pathology postdoctoral fellow, and Joseph Anderson, USDA-ARS scientist and Purdue Department of Agronomy assistant professor.

The USDA-ARS provided funding for this study.