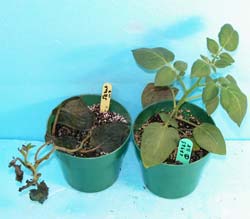 Potato plants exposed to the pathogen that causes late blight, the disease responsible for the Irish potato famine, soon wither and die (left). The plant on the right has been engineered to resist the devastating disease through incorporation of a gene found in a wild Mexican potato, as part of research by John Helgeson, professor of plant pathology and Jiming Jiang, professor of horticulture and others. <br>Photo by: courtesy department of plant pathology <br>Date: July 2003 <br>

Scouring the genome of a wild Mexican potato, scientists have discovered a gene that protects potatoes against late blight, the devastating disease that caused the Irish potato famine.

The discovery of the gene and its cloning by scientists at the University of Wisconsin-Madison was reported today (July 14) in online editions of the Proceedings of the National Academy of Sciences (PNAS).

The identification of the gene, found in a species of wild potato known as ´Solanum bulbocastanum, holds significant potential. All of the varieties now cultivated commercially on more than 1.5 million acres in the United States are highly susceptible to potato late blight, a family of fungal pathogens that wreaks havoc in the field, turning tubers to mush and invariably killing any plant it infects.

“We think this could be very useful,” says John Helgeson, a UW-Madison professor of plant pathology, a research scientist with the U.S. Department of Agriculture and a senior author of the PNAS paper. “No potato grown in the United States on any scale at all has resistance to this disease.”

With the blight-resistant gene in hand, the Wisconsin team, which also includes Jiming Jiang, a UW-Madison professor of horticulture, was able to engineer plants that survived exposure to the many races of Phytophthora infestans. The insertion of a single gene, according to Jiang and Helgeson, effectively protects plants from the range of late blight pathogens.

“So far, the plants have been resistant to everything we have thrown at them,” says Helgeson.

The world’s most serious potato disease, late blight is best known as the cause of the Irish potato famine. Seeming to appear from nowhere in 1845, the fungus wiped out the staple crop of the densely populated island nation, causing mass starvation over five years, killing more than a million people and sparking a wave of immigration that had worldwide social consequences.

More than 150 years later, Ireland’s population has yet to return to pre-famine levels.

Prior to the 1990s, chemical fungicides were available in the United States and effectively held the disease at bay. But new strains of the pathogen have emerged, testing the limits of the technology and requiring American farmers to treat potato fields as many as a dozen times a season at a cost of up to $250 per acre. In warmer climates such as Mexico, fields may be treated as many as 25 times a year with the costly and toxic chemicals.

“We used to be able to get by, but the new (late-blight) strain just levels things in no time at all,” says Helgeson.

The gene that protects potatoes from the fungus comes from a plant that scientists believe co-evolved in Mexico alongside the late-blight pathogen. It was discovered, ironically, as a result of the emergence of a new strain of P. infestans that swept through the United States in 1994. At UW-Madison’s Hancock Agricultural Research Station, the only plants to survive were the wild Mexican species and its progeny in Helgeson’s test plots.

Subsequent to the 1994 outbreak, which required the development of new fungicides for agriculture, Helgeson and his colleagues began the hunt for the genes that conferred resistance on the wild Mexican cousin of the domesticated tubers familiar to consumers.

In 2000, Helgeson’s lab reported narrowing the search to one of the 12 chromosomes of the wild plant. Now, with the gene identified, cloned and successfully tested in engineered varieties in the laboratory, at hand is a new technology that could save farmers hundreds of millions of dollars and benefit the environment by eliminating the application of thousands of tons of toxic chemicals.

But despite the huge economic and environmental gains that could be realized, it is unclear if the technology will be widely utilized. Because of European fears of genetically modified crops, and the control exercised over growers by a few large buyers, there is currently no engineered potato in commercial production anywhere.

The use of conventional breeding techniques to move the newfound blight-resistance gene into the few dominant commercial varieties popular in the United States is all but impossible, according to Jiang.

“We can do it by conventional breeding, but we can’t move it into the standard cultivated varieties without losing them,” he says. “It is almost impossible to create another Burbank variety, for example, through conventional breeding. Your odds of getting the one gene in would be like winning the lottery.”

Still, the Wisconsin group, plans to develop engineered varieties for the garden. The hope, they say, is to develop the technology that will gradually win consumer acceptance and, perhaps someday, go where no GMO has gone before.