Home / Agricultural and Forestry Science / Researchers Get To The Root Of Cassava’S Cyanide-Producing Abilities
13.05.2003

Researchers Get To The Root Of Cassava’S Cyanide-Producing Abilities 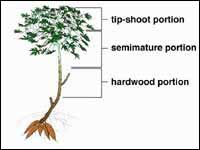 A cassava plant usually reaches 3 to 4 feet in height, though some plants can grow up to 13 feet tall. <br>

Cassava is the third-most important food source in tropical countries, but it has one major problem: The roots and leaves of poorly processed cassava plants contain a substance that, when eaten, can trigger the production of cyanide.

That’s a serious problem for the 500 million people who rely on cassava as their main source of calories, among them subsistence farmers in Sub-Saharan Africa, said Richard Sayre, a professor of plant biology at Ohio State University. He and his colleague Dimuth Siritunga, a postdoctoral researcher in plant biology at the university, have created cyanogen-free cassava plants. A cyanogen is a substance that induces cyanide production.

Their study appeared in a recent issue of the journal Planta.

Cassava is a hardy plant – it can remain in the ground for up to two years and needs relatively little water to survive. It’s the key source of carbohydrates for subsistence farmers in Africa. But an unprocessed cassava plant contains potentially toxic levels of a cyanogen called linamarin.

“If we could eliminate the cyanogens in cassava, the plant wouldn’t need to be processed before it’s eaten,” he said. “In Africa, improperly processed cassava is a major problem. It’s associated with a number of cyanide-related health disorders, particularly among people who are already malnourished.”

Chronic, low-level cyanide exposure is associated with the development of goiter and with tropical ataxic neuropathy, a nerve-damaging disorder that renders a person unsteady and uncoordinated. Severe cyanide poisoning, particularly during famines, is associated with outbreaks of a debilitating, irreversible paralytic disorder called Konzo and, in some cases, death. The incidence of Konzo and tropical ataxic neuropathy can be as high as 3 percent in some areas.

People who get little or no protein in their diets are particularly susceptible to cyanide poisoning, as they lack the proper amino acids necessary to help detoxify the poison.

Sayre and Siritunga engineered cassava plants in which the expression of the genes responsible for linamarin synthesis was blocked. They then analyzed the linamarin content in these plants’ leaves and roots, finding a significant reduction of the cyanogen in leaves (by 60 to 94 percent) and in roots (by 99 percent) compared to normal cassava plants.

“When leaf linamarin was reduced by 40 percent, the roots contained less than 1 percent of the cyanogen,” Sayre said, adding that it’s critical for the leaves of a growing cassava plant to contain a small amount of linamarin.

“Linamarin protects cassava from being eaten by insects or animals,” he said. “Plants with moderate linamarin levels in their leaves and that contain nearly no linamarin in their roots are both protected from herbivores and contain far less of the cyanogen in their roots.”

Cyanide forms when cassava is processed. But the toxin is volatile and is released into the air, rather than remaining in the food. Correct processing methods ensure that the cyanogen content in cassava plants will be within an acceptable range, Sayre said. (The United Nations’ Food and Agriculture Organization has established maximum recommended cyanide levels for foods.)

“In African countries, it’s mostly women and children who are susceptible to cyanide poisoning,” Sayre said. “Women are usually charged with processing the plant, which leaves them susceptible to inhaling cyanide gas. Cyanide can poison a person by either inhalation or ingestion.”

The shelf life of a cassava root is very short once it’s removed from the stem, so there’s an urgency to get the food to market.

“Roots can turn to mush in less than a week,” Sayre said. “Cassava’s fresh market time is very small, so it has to be processed immediately.”

And that’s where consumers can run into problems — the rush to get cassava to the market may keep some batches of cassava from being processed properly. Even if the plant is properly processed, exposure to the volatile cyanide can cause health problems in people charged with processing the roots and leaves.

While cassava roots contain less than 10 percent of the linamarin level found in cassava leaves, it’s the long-term exposure to cyanide that presents a threat to humans.

“Linamarin is converted to cyanide when eaten,” Sayre said. “Repeated exposure of low doses of cyanide over time can lead to health problems.

“But these cyanogen-free plants represent a safer and more marketable food product as well as a tool to determine the role of cyanogens in protection against insect pests and crop productivity.”

“However, preliminary studies indicate that linamarin may be important in the transport of nitrogen from cassava leaves to its roots in young plants,” he continued. “Plants producing varying levels of linamarin need to be tested in field trials to determine if the inhibition of linamarin synthesis affects plant yield.”

Grants from the Rockefeller Foundation, the Consortium for Plant Biotechnology Research, the Cassava Biotechnology Network and Ohio State University supported this research.