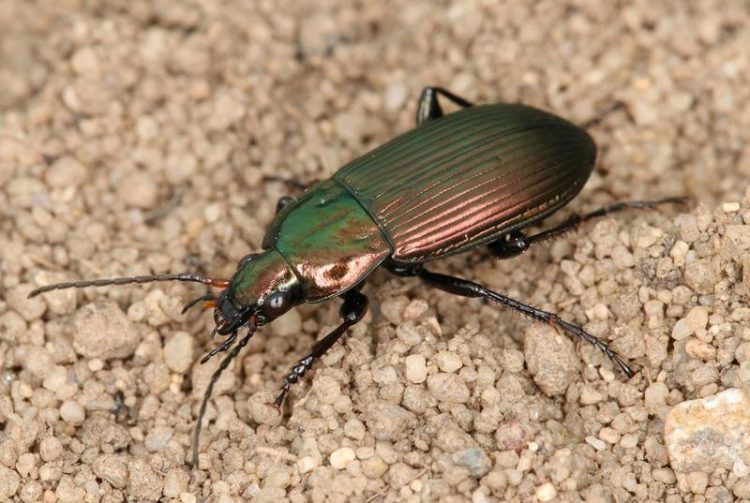 Oilseed rape fields are home to a variety of insects that bother farmers. The pollen beetle is one of them. The beetle's larvae feed on the flower buds of oilseed rape causing damage and crop failure. The larvae of different species of weevils also have a preference for rape: They tunnel into the plants' stems making them wither and die.

Conventional farming practice generally relies on chemical pesticides to exterminate the hungry insects. But obviously their populations can also be kept at bay by promoting their natural enemies. These include ground beetles, spiders and other predatory insects that live on the ground.

“They eat the pests' larvae when they drop to the ground to pupate,” Professor Jochen Krauß explains; he is a biologist at the Biocentre of Julius-Maximilians-Universität Würzburg (JMU) in Bavaria, Germany. As a result, there are fewer pests on the fields in the next year. Earlier studies showed that the predatory insects are quite efficient at fighting the rapeseed pests.

How can we promote the natural enemies of rape pests in modern agricultural landscapes? The research team from the JMU Chair of Animal Ecology and Tropical Biology has found out that this can be comparatively easily achieved with the help of flowering areas and other so-called agri-environmental schemes.

These measures are specified by the government and are relatively well-established on German farmland. But when it comes to implementing the measures, better strategic and tactical planning are necessary, as the researchers report in the Journal of Applied Ecology.

Flowering fields and ecological focus areas are either plots of arable land lying fallow where farmers seed flowering plants or arable fields that have developed into meadow-like habitats.

“Such land provides permanently good living conditions for the enemies of rape pests. From there, the predators can set out to raid the fields and devour the pests' larvae,” says Professor Ingolf Steffan-Dewenter who holds the chair.

Twice as many predators in oilseed rape fields

“We encountered twice as many predatory ground beetles in oilseed rape fields bordering a field with an agri-environmental scheme than on other rape fields,” says PhD student Fabian Bötzl. As the distance to the flowering plot increases, the number of predatory species and individuals decreases. Distance is a decisive factor of effective natural pest control, because the density and diversity of predators is crucial in this respect.

“Agri-environmental schemes have the same effect as semi-natural habitats. This demonstrates how valuable these measures are for the agricultural landscape,” the JMU ecologist says and recommends incorporating flowering areas and other refuges for animals in agricultural landscapes in a strategic and evenly distributed approach.

This not only promotes wild bees and other pollinators, it also supports the natural enemies of pest insects. The distance effects discovered by the researchers can now be used to determine best farming practices based on model calculations and simulations.

Facts about the study

The research team studied 31 areas around Würzburg in northern Bavaria – between the towns of Gemünden, Ochsenfurt and Hassfurt – to obtain the results. They investigated the effects of older and more recent flowering areas, of ecological focus areas and of semi-natural calcareous grasslands.

The diversity and number of predators that are active on the ground surface (beetles and spiders) were determined by using pitfall traps. The experiment was conducted over a period of three months during the growth period of oilseed rape to be able to assess the natural pest control during this time.

The study was performed within the scope of the european Ecodeal collaborative project (Enhancing biodiversity-based ecosystem services to crops through optimized densities of green infrastructure in agricultural landscapes). Professor Steffan-Dewenter coordinates the German section of the project.