Plant doctors get to the root of plant stress in rice 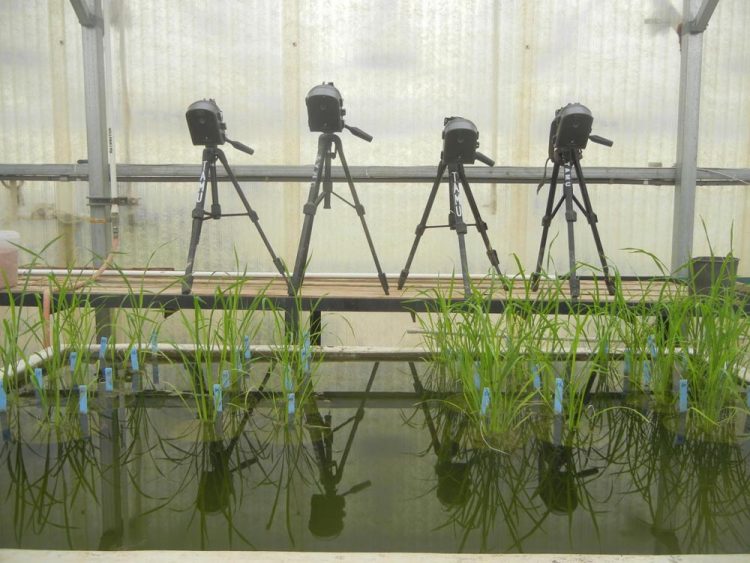 Sitting in an air-conditioned office at the Texas A&M AgriLife Research and Extension Center at Beaumont, it's obvious: People work better indoors when temperatures outside climb to the 90s while the blazing sun shimmers through waves of humidity on nearby experimental rice plots.

The rice plants, however, can't go inside. So, they stress. And for rice farmers, that means lower yield and quality.

Most growers resign themselves to the facts. It's the summer in Texas. It's hot.

But Dr. Lee Tarpley, AgriLife Research plant physiologist, is studying what specifically affects rice plants under extreme environmental conditions. Knowing that, he believes, could lead to ways of helping plants thrive in the heat and other stressful conditions.

“We tend to view these environmental stresses as necessary evils — especially temperature stresses — as if there is little we can do to counter the effect,” he said. “We're finding that we can use specific knowledge of how the stress affects the plant to design prevention measures.”

Tarpley and Dr. Abdul Razack Mohammed, AgriLife Research assistant scientist, presented their findings at the recent Rice Field Day at the Beaumont center. They've studied not only the effect of heat but cold, submergence, salinity, wind and drought on rice crops.

One of the specific impacts, they discovered, is high nighttime temperatures, a common phenomena in Texas.

“High night temperatures do two things to rice plants,” Tarpley said. “The rice plant increases its production of a plant stress hormone, and an oxidative-stress response occurs, which injures the plant. Both of these ultimately lead to losses in yield and quality.”

“We can spray the crop with a chemical that prevents the stress hormone activity, so that the plant never senses that it is supposed to be in stress,” Tarpley said. “Or we can spray the plants with a sort of vaccination, which is like a small dose of 'oxidative stress.' That triggers the plant to build its capacity to be acclimated to future stresses.”

Commercial pre-harvest use of some of the stress hormone chemicals on higher-value crops is occurring, Tarpley said, and it is just a matter of time and acceptance before the vaccination-type products will be used on rice crops in the U.S.

Because of their research on the specifics of rice stress, the international company Agrofresh, based in Collegeville, Pennsylvania, asked Tarpley and Mohammed to study transplanting shock, a condition that affects farms mostly in Asian countries where rice is started in a nursery then transported to a field for planting.

“Transplanting shock can decrease growth and development,” Tarpley said. “And one thing we noticed is that a lot of root pruning occurs during the transplanting process. That reduces the production of tillers, which are important since that is where the rice grains develop.”

They found that root pruning reduces the net photosynthetic rate.

That was key because photosynthesis – the way plants use sunlight to make food and grow – depends on the green pigments called chlorophyll. If there's not enough chlorophyll, the plant doesn't grow well. And the connection between low chlorophyll and the presence of ethylene, a natural plant hormone, has been well documented.

Ethylene is what causes bananas, apples and avocados to ripen and get soft, and it is used commercially to ripen some produce such as tomatoes after they are picked.

The researchers decided to treat some plants with 1-methylcyclopropene, or 1-MCP, a compound that is used to keep plants and produce fresh because it blocks ethylene perception in plants.

The idea was to see if 1-MCP would make the rice plants unaware that the roots were pruned, thus slowing the effect of ethylene and maintaining a healthy level of chlorophyll, Tarpley.

“The application of 1-MCP prevented transplanting shock in rice,” he said. “The treated plants had more tillers per plant, more root length and greater chlorophyll concentration and net photosynthetic rate.”

He said though U.S. rice farmers directly seed their crops rather than transplant, root pruning can also occur due to rice water weevils. So his team plans to test the application of 1-MCP for its ability to mitigate damage from those insects.

Tarpley added that his research team continues to explore the physiological effects of various environmental stresses so that when pinpointed, management strategies can be developed.