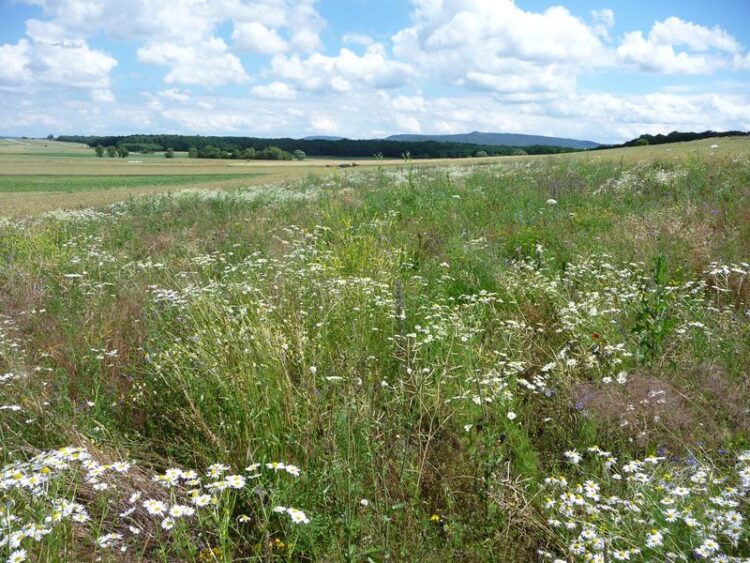 In an exceptionally broad and elaborate study, biologists from the University of Würzburg investigated the biodiversity of flowering fields planted as part of agri-environmental schemes.

Due to modern agriculture, biodiversity across many species groups is in decline. Over the last three decades, attempts have been made to counteract this with agri-environmental schemes at various levels – from the national federal state to EU-wide programmes. Not only out of appreciation of nature, but also because many species fulfil important functions for agriculture itself: some pollinate crops, others regulate pest populations.

One of the measures promoted in the schemes is the creation of flowering fields. “However, it is currently not conclusively known whether and to what extent these habitats achieve the desired effect on biodiversity,” says Professor Ingolf Steffan-Dewenter. In order to provide more clarity, the head of the Chair for Animal Ecology and Tropical Biology at Julius-Maximilians-Universität Würzburg (JMU) in Bavaria, Germany, launched a large-scale field study in 2016. The results have now been published in the scientific journal “Proceedings of the National Academy of Sciences of the United States of America” (PNAS).

The biologists investigated the species composition of different types of flowering fields in agricultural landscapes in northern Lower Franconia. As a benchmark, they used the semi-natural calcareous grasslands that can be found in this region. These usually protected flowering habitats are known for their high species diversity.

“Our approach differs from previous scientific studies in this field in some essential respects,” explains Fabian Bötzl, the lead author of the Würzburg study. First, there is the extent of the species groups considered: A total of twelve taxonomic groups were studied – from vascular plants to cicadas, bees, flies, butterflies and beetles to birds. In three years of data collection in the field and about another year of laboratory analyses, the researchers identified almost 55,000 specimens that could be assigned to 3187 taxa.

Temporal continuity as an important factor

Secondly, they included the temporal continuity of the diverse flowering fields. “This means that we – unlike many previous studies – took into account the respective age of the flowering fields and their history of use,” explains JMU professor Jochen Krauss, co-author of the study.

The results underpin that diversity increases in most taxonomic groups with the temporal continuity of the habitats. For example, there are only five to six species of grasshoppers on newly established flowering fields in the first year, which then increase over time to the approximately 15 species of the calcareous grasslands used as a reference.

Young areas also have their advantages

As a consequence, should – in terms of species conservation – the rule be ‘the older the better’? “It is not that simple, as with flowering fields getting older, the composition and the respective number of species also change,” Bötzl explains. “For some species, such as ground beetles, which play an important role in pest control in adjacent agricultural areas, young habitats are more advantageous. Their species number decreases over time.”

Another result of the study: the size of the flowering fields and their surrounding landscape – whether rather monotonous or diverse – have only minor effects on the development of species diversity.

It is the mix that counts

In addition to the scientific community, the planning authorities responsible for agri-environmental programmes can also be potential addressees of the Würzburg research results. The following messages can be derived for them: There is no ideal type of flowering field that supports all species equally well. For the aim of protecting as many animal and plant species as possible, well-distributed flowering fields of different ages are recommended in the agricultural landscape.

Higher wheat yields and protein content on the horizon

Vertical farming will play a role in future food production