Home / Agricultural and Forestry Science / New insight into why Pierce's disease is so deadly to grapevines
11.06.2018

New insight into why Pierce's disease is so deadly to grapevines 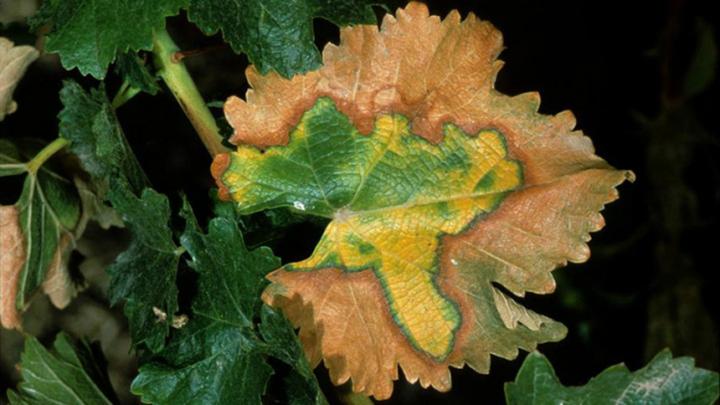 This is symptoms of Pierce's disease on a grapevine leaf. Credit: University of California

Scientists are gaining a better understanding of Pierce's disease and how it affects grapevines. The disease, which annually costs California more than $100 million, comes from a bacterium called Xylella fastidiosa. While the bacterium has been present in the state for more than 100 years, Pierce's disease became a more serious threat to agriculture with the arrival of the glassy-winged sharpshooter insect, which can carry the bacterium from plant to plant.

In a new study, published in Frontiers in Plant Science, researchers at the University of California, Davis, have identified a set of molecular markers that influence the onset of Pierce's disease in grapevines.

“We now have a very good idea of the plant responses to the disease,” said lead author Paulo Zaini, a postdoctoral researcher in the Department of Plant Sciences at UC Davis. “This will help us in early diagnosis and help us design strategies to protect the plant from damaging itself.”

The glassy-winged sharpshooter injects the Xylella fastidiosa bacterium into the plant's xylem, which is the part of the plant that carries water. The disease causes leaves to yellow or “scorch,” eventually drying up and dropping from the vine. It can kill a plant in three to five years. Few diseases can kill grapevines so quickly.

“What growers do to stop the bug is just apply insecticides at an increasingly growing rate,” said Zaini. “It's not a sustainable strategy.”

In this study the authors looked at the plant's responses to the disease compared to healthy plants. Better understanding the biochemical changes with onset of the disease can help foster new strategies to increase plant health, rather than having to use insecticides to fight disease.

Scientists have long thought the bacteria growing in the xylem blocked the flow of water to the leaves.

“We thought that the blockage causes a drought stress, but there's much more to it than that.” said Abhaya Dandekar, professor of plant sciences and the study's principal investigator. “Not all the vessels are blocked.”

The blockage might be part of the problem, but it doesn't answer all the questions. More than 200 plant species harbor the bacterium but are asymptomatic.

Having identified molecular markers important for Pierce's disease in grapevines, researchers can use them to study grapevine varieties or other plants that do not develop disease.

The study was funded by the California Department of Food and Agriculture Pierce's Disease Board and CAPES, a Brazilian scientific research funding agency.