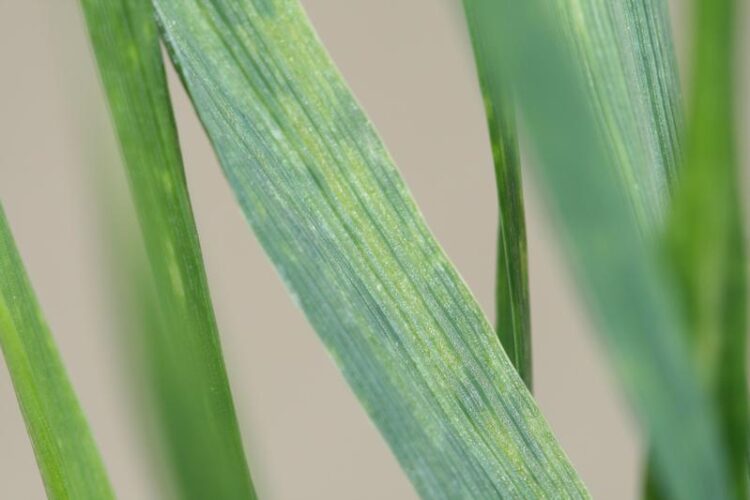 Through a genome-wide association study (GWAS) of 500 wheat varieties, researchers of the Julius Kühn-Institut have identified 14 gene loci that are consistently associated with low yield losses due to infection by Wheat dwarf virus. These QTL (quantitative trait loci) could be used for breeding new virus resistant wheat cultivars.

If the leafhopper Psammotettix alienus pierces a wheat plant to suck plant sap, the consequences may be fatal: The leafhopper can transmit the Wheat dwarf virus (WDV) through its saliva. Depending on the age of the plant at the time of infection, yield can drop by at least 30 percent, and even total failure is possible. Researchers of the Julius Kühn Institute (JKI) have now tested 500 wheat accessions – including cultivars, gene bank accessions and wild species – for their resistance to WDV. The wild species proved to be similarly susceptible to the virus as modern cultivars, suggesting that breeding has not caused a loss of resistance genes. More than half of the accessions tested died due to the infection. Two Hungarian cultivars described as resistant showed only low quantitative resistance to the virus disease, with infection rates of 21.5 and 34.5 percent. However, the researchers discovered almost complete resistance in the Russian winter wheat cultivar “Fisht” with an average of 5.7 percent of infected plants. They published their results in the open-access journal “Frontiers in Plant Science”.

A genome-wide association study (GWAS) revealed even more: “For the first time, we succeeded in identifying quantitative trait loci (QTL) associated with low losses in yield after virus infection,” explains Anne-Kathrin Pfrieme, who is writing her doctoral thesis on this topic at the JKI Institute for Resistance Research and Stress Tolerance. QTL are sections of the genome that are associated with quantitative traits – such as height, weight or even disease resistance. These gradually measurable traits are the result of the interaction of different genes. Of the 35 QTL initially identified for WDV resistance, further tests showed that 14 QTL are consistently associated with low yield losses after WDV infection. “With the help of genetic markers, these QTL could be crossed into elite wheat lines and are thus a promising tool for generating resistant varieties in the future,” says Pfrieme, describing the significance of her research results for agricultural practice. The interest of various breeding companies, which were involved in the research together with the German Society for the Promotion of Plant Innovation (Gesellschaft zur Förderung von Pflanzeninnovation, GFPi), is great – especially since the virus cannot be controlled and no insecticide is approved in the European Union to control the transmitting leafhopper.

Many cicada, leafhopper and aphid species benefit from climate change, because the higher temperatures allow them a longer activity period and in some cases another generation of offspring. This was recently proven once again by an investigation with an insect suction trap at the JKI Quedlinburg site (to the press release in German). The region of western Saxony-Anhalt is particularly affected by climate change in the form of rising temperatures and drought. At the same time, viral diseases transmitted by these vectors are also increasing.

The Wheat dwarf virus has been spreading throughout Europe since the middle of the 20th century. Besides wheat, it also affects barley and other cereals. Today it is one of the most important cereal diseases in Europe, Asia and Africa. It is transmitted in autumn by adult leafhoppers (Psammotettix alienus). Secondary infection by nymphs of P. alienus is possible in spring. Infection is manifested by striped colouring of the leaves, chlorosis, reduced number of ears, reduced winter hardiness and the death of plants in early stages of development.

As viruses cannot be controlled with pesticides and, in some cases, environmentally friendly pesticides against the vectors are lacking, the breeding of resistant varieties is becoming increasingly important.

Higher wheat yields and protein content on the horizon

Vertical farming will play a role in future food production