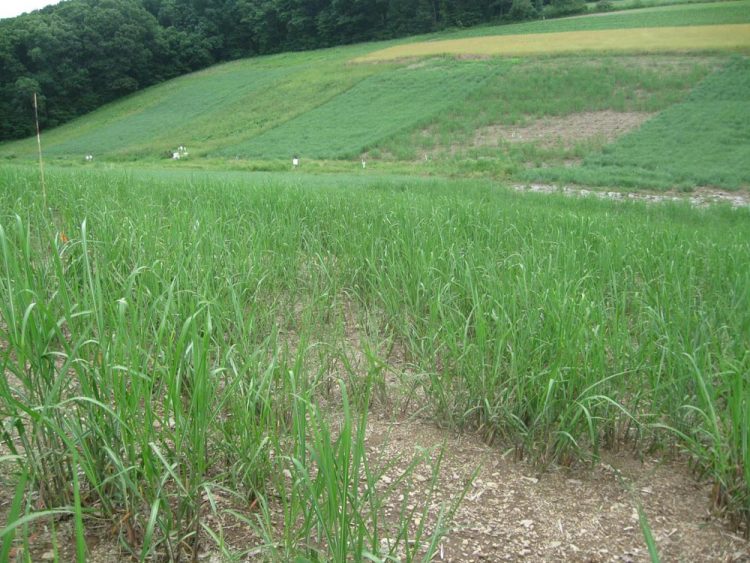 This is a plot of biofuels grass being grown in research plot Credit: Penn State College of Agricultural Sciences

Debasish Saha, postdoctoral scholar in plant sciences, Penn State College of Agricultural Sciences and colleagues, measured the amount of nitrous oxide, a potent greenhouse gas, emanating from plots of biofuels-producing switchgrass — a native perennial grass — and miscanthus — a non-native grass species — growing in an experimental area in eastern central Pennsylvania and compared it to emissions from adjacent, undisturbed CRP acres. The experiment took place in a long-term monitoring site managed by the U.S. Department of Agriculture's Agricultural Research Service.

Nitrous oxide is produced by micro-organisms when soils with excess nitrogen from fertilizer and other sources coincide with a near-saturated soil environment after a storm or snowmelt event. It is mostly emitted from agricultural activities and contributes about 6 percent of the total warming influence on the planet.

An increase of nitrous oxide emissions from CRP land planted with energy crops would undermine the logic of using CRP lands for energy crops production. The transition phase — when energy crops are established — is one of the most sensitive periods because the plants are small and are just establishing their root system.

The researchers measured nitrous oxide emissions in the bottom of a watershed that is a realistic example of CRP lands in a seasonally wet landscape. An existing CRP tract was partially converted to switchgrass and miscanthus and the researchers measured nitrous oxide emissions from May to September of 2013 with gas-sampling devices.

The sampling frequency varied from weekly to biweekly, and increased after fertilization and precipitation events. The researchers also continuously monitored soil water content to understand soil water dynamics in the landscape, a critical trigger for nitrous oxide emissions. They installed soil moisture sensors at three soil depths in each of 48 monitoring points and connected each to data loggers through a network of buried cables.

Saha and colleagues published their findings today (Mar. 10) in Global Change Biology: Bioenergy, suggesting that CRP and other marginal, streamside lands set aside for conservation are good candidates for biomass production. They found that although nitrous oxide emissions did rise above the baseline provided by CRP lands, the increase only happened in a small portion of the landscape.

“Nitrous oxide emissions were only higher in the footslopes nearest the stream that are wet and retain subsoil moisture for the longest period of time after a storm or snowmelt event,” said Saha. “So, are energy crops a problem or a solution in this regard? Clearly, a large portion of the landscape planted with switchgrass and miscanthus did not emit more nitrous oxide than the rest of the CRP land, and it is expected that once established, large emissions from the footslope can be suppressed.”

Energy crops can help reduce the carbon footprint of the U.S. economy with a domestic source of a renewable fuel. Expanding energy crops, however, requires displacing other existing land uses. The several million acres of CRP lands in the United States, which have been set aside for conservation, seem to be particularly suitable for this expansion.

The federal government pays producers not to grow crops on CRP lands.

Growing biomass crops on CRP lands could be good for the environment, noted research team member Armen Kemanian, associate professor of production systems and modeling, Penn State. “In the northeastern U.S., these CRP lands tend to be on seasonally wet or steep areas of the landscape that are environmentally sensitive. When combined with high mineral-nitrogen availability from fertilizers from adjacent crop lands and other sources, wet conditions fuel the emissions of nitrous oxide.

“Grass energy crops in these landscape locations can provide additional water-quality benefits. Due to the high biomass-production potential, these crops can use up nutrients that otherwise would go to the stream and end up in the Chesapeake Bay. Thus, when these perennial energy crops are added to heavily agricultural landscapes, the results can be a win-win — low-carbon energy and cleaner water.”

A U.S. Department of Transportation Sungrant, the USDA and the Richard King Mellon Foundation funded this work.