First discovery of bilirubin in a flower announced 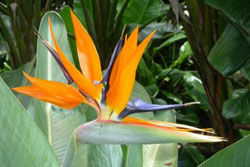 Bilirubin has been discovered in the beautiful and iconic Bird of Paradise flower. Credit: Photo by David Lee

A research team led by Cary Pirone from the Department of Biological Sciences at Florida International University has identified bilirubin in the popular Bird of Paradise plant. The breakthrough study, published in the September 2010 issue of the American Society for Horticultural Science's journal HortScience, provides new insights into color production in this iconic tropical plant.

Previously thought to be an “animal-only” pigment, bilirubin is best known as the yellowish hue associated with bruises and jaundice sufferers. In 2009 the FIU researchers found bilirubin in the arils of Strelitzia nicolai, the white Bird of Paradise tree. The incredible discovery—that bilirubin exists in both plants and animals—put Pirone's research on the scientific map. The current study expands the original research and reveals new insights into the presence of animal pigment in flowers. Advisor David Lee credits Pirone for her persistence and scientific acumen. “Cary has made a remarkable discovery”, he noted, adding that it was Pirone's persistence and curiosity that persuaded colleagues that she was on the right track.

Strelitzia reginae Aiton, the Bird of Paradise plant, is known for its vibrant orange and blue inflorescences. Native to South Africa, it is widely cultivated in warm temperate and tropical regions. Aside from the widely recognized shape of its flower, which resembles the head of a bird, Strelitzia reginae is also admired for its brilliant floral coloration. In contrast to its showy flowers, the fruit of the Bird of Paradise is pale and partially obscured by the bract during development. When it matures, however, the capsule breaks open to reveal intensely colored orange arillate seeds. Remarkably, the distinct aril color can remain unchanged for decades after the plant dies.

Using high-performance liquid chromatography (HPLC) and HPLC/electrospray ionization–tandem mass spectrometry, the research team discovered bilirubin to be the primary aril pigment of Strelitzia reginae and found low concentrations of bilirubin in the plant's sepals. In mature aril tissue, bilirubin was present as granular bodies irregularly distributed throughout the cell. In mature sepal tissue, the researchers observed elongate structures that were previously identified as containing carotenoids.

“This research is the first discovery of bilirubin in a flower; it verifies the presence of bilirubin in a plant species other than Strelitzia nicolai. With further research on the function, distribution, and synthesis of bilirubin in plants, the information may be useful for practical applications such as the manipulation of color through breeding and genetics”, the researchers concluded.

The findings will likely have broad appeal among flower lovers, observed Lee. “When you discover something this significant about something this familiar (the Bird of Paradise flower), the story has power”.

The complete study and abstract are available on the ASHS HortScience electronic journal web site: http://hortsci.ashspublications.org/cgi/content/abstract/45/9/1411