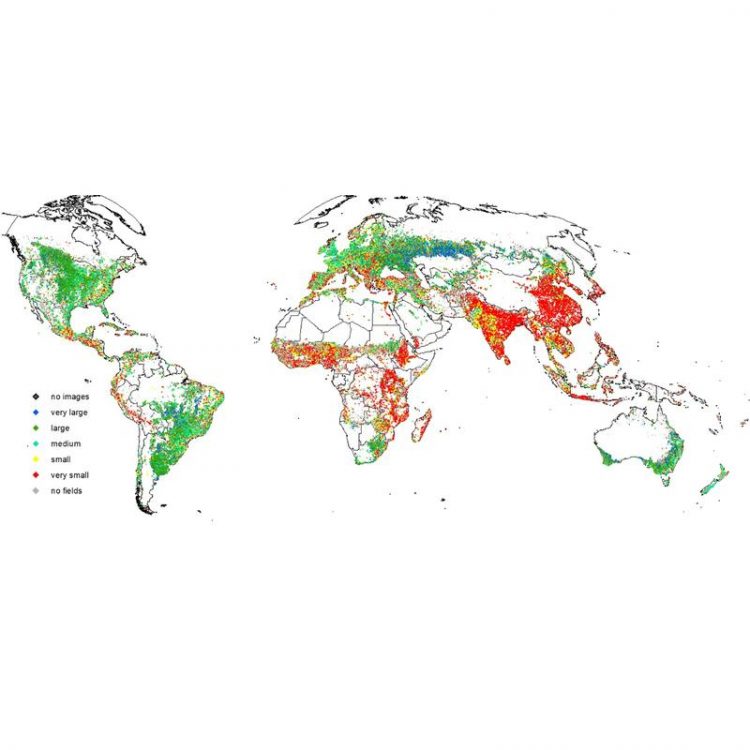 Smallholder farms are classified as being made up of fields less than around 2 ha in size. Evidence is increasing that such farms make a substantial contribution to world food production, but until now, the data on the number and distribution of smallholder farms has been lacking.

The study is the first to estimate field sizes at the global, continental, and national level, and covers the entire world, rather than just 55 countries as in earlier studies. The data are much more detailed and denser than anything previously collected. The crowdsourcing method used is a unique approach to quantifying and mapping field size.

The crowdsourcing campaign began in June 2017 using the Geo-Wiki app. It lasted for four weeks and was focused on collecting field size data. The Geo-Wiki app takes high resolution satellite imagery from Google Maps and Microsoft Bing and allows users to visually assess those images, for example for land cover or human impact. In this case, users were asked to assess images of agricultural land.

The user was asked to define which field sizes were present, and if there was more than one field size, which was the dominant size, using either an estimation grid, or with an area measuring tool. Each image was checked by three users and all users were trained in using the app through the use of a video and slides before they began.

Users also had to complete ten training images before contributing to the official survey, with feedback given on each. Random ‘control’ images that had been expertly assessed were randomly shown to users, and if these were incorrectly classified, the user received text feedback. The researchers added this quality control feature to improve the quality of the results. Prizes were offered as an incentive to participate.

A previous Geo-Wiki study in 2011 collected 13,000 unique samples, but this latest survey collected 130,000 samples. The researchers used the 390,000 classifications (from three ‘visits’ to each site) to create a map and calculate agricultural area proportions at the global, continental, and national levels.

Dominant field sizes across the world vary. African countries such as Ethiopia, Mali, Nigeria, and Tanzania along with China, India, and Indonesia, tend to have very small fields. European nations tend to have medium-sized fields. Australia, Brazil, Kazakhstan, and the US tend to have very large fields. In some areas, including northern China, central India and Turkey, the field size is very mixed.

The crowdsourced data set is openly available for use in future research, for example integrated assessment modeling, comparative studies of agricultural dynamics across different contexts, or for training and validation of remote sensing field size delineation.

Such information could also contribute to achieving the UN Sustainable Development Goal 2 (SDG2) – End hunger, achieve food security and improved nutrition and promote sustainable agriculture, according to the researchers.

If policymakers have an accurate overview of the global distribution of field sizes, this will provide a better background for decision making related to food systems and agriculture. Field size is a good indicator of agricultural intensity.

“We have filled the gaps in available information on global field size distribution by covering countries where no statistical surveys were carried out and no mapping was done with the help of remote sensing. Therefore, the field size data set we developed provides full and accurate information on the distribution of field sizes to support policy decision making related to food security issues,” says Lesiv.

About IIASA:
The International Institute for Applied Systems Analysis (IIASA) is an international scientific institute that conducts research into the critical issues of global environmental, economic, technological, and social change that we face in the twenty-first century. Our findings provide valuable options to policymakers to shape the future of our changing world. IIASA is independent and funded by prestigious research funding agencies in Africa, the Americas, Asia, and Europe.

29.03.2021 / Agricultural and Forestry Science
Back to the Homepage