Covering the bases with cover crops 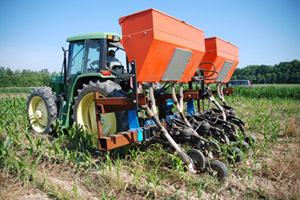 Most of us think that farmers grow and harvest crops for food. That's true for many crops: they either feed humans or farm animals. However, there's another category of crop that has a vital function in agricultural systems.

“Cover crops are usually planted between the regular crop production periods,” says Hanna Poffenbarger. Poffenbarger is a graduate student in the department of agronomy at Iowa State University. She researched cover crops in her graduate work at the University of Maryland. “They protect the soil from erosion and take up excess nutrients when the ground would otherwise be bare.”

Instead of being harvested, many cover crops are returned to the soil. In this way their nutrients can be used by other crops. Legume cover crops, in particular, are an excellent source of nitrogen–a key nutrient for all plant life. Cover crops also control weeds and help to manage pests.

Once the cover crops' season is finished, they need to break down quickly as the next crop begins to grow. Working under the advisement of Steven Mirsky (USDA-ARS) and Ray Weil (University of Maryland), Poffenbarger examined mixtures of two cover crops, cereal rye (a grass) and hairy vetch (a legume).

Cereal rye decomposes slowly and provides long-lasting mulch. This controls weeds and conserves soil moisture. However, it leaves the soil without much nitrogen for any crop planted later. Hairy vetch decomposes faster and provides a more immediate supply of nitrogen, but it doesn't make a good mulch.

What is the perfect proportion of these two cover crops? “We wanted to determine how the composition of the cover crop mixture affects the rate of nitrogen release and the persistence of the mulch,” Poffenbarger explains.

In general, researchers found more hairy vetch sowed on the field resulted in more nitrogen. The amount of cover crops broken down also increased. Additionally, cover crops combined with poultry litter had even more decomposition and nitrogen release than cover crops alone. However, this result only applied if the cover crop contained at least 50% cereal rye.

The method by which scientists applied poultry litter also played an important role. Poultry litter mixed with cover crop residues increased decomposition and nitrogen release. In contrast, poultry litter applied under the soil surface did not affect these factors.

Poffenbarger's research will be used to develop decision-making tools to help farmers understand which benefits their cover crops can best provide. Some farmers might prefer cover crops that break down slowly, but others may want quick nitrogen release.

“Farmers can use our results to optimize cover crop management for their specific mulch and nitrogen goals,” she says.

Poffenbarger notes that future work will provide more information about how cover crops break down in different locations. “The final step,” Poffenbarger says, “is to make this information easily available through online resources.”

Poffenbarger's research is published in Agronomy Journal. The research was supported by funding from the USDA-NIFA Sustainable Agriculture Research and Education (SARE) program.