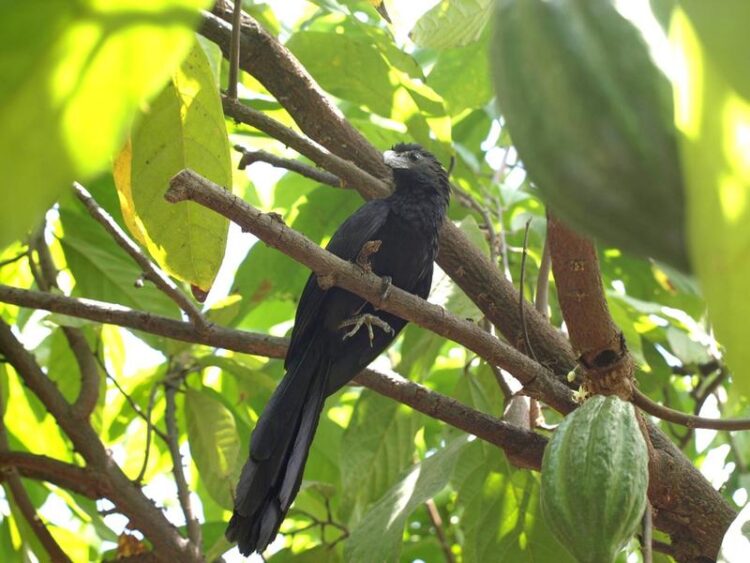 A bird found in cacao agroforests in Northern Peru, the groove billed ani. Birds, when occurring in cacao agroforests together with bats, ensured cacao yields in the study region. Their presence increased yield by 114%, compared to their absence.
Credit: Justine Vansynghel / Universität Würzburg

In the cultivation of organic cacao, many factors determine the yield. An international research team with scientists from the universities of Würzburgh and Göttingen has now identified important players and their combined effects.

It’s not possible to grow cacao without insects – that’s logical. After all, they ensure that the flowers are pollinated and that the valuable cacao fruits, a sought-after material for the food industry, develop. Studies in Indonesia had shown in the past that birds and bats also contribute to increasing crop yields. However, a new study published in the journal Proceedings of the Royal Society B shows now how large this contribution is.

The study is the result of new findings from scientists from the universities of Würzburg, Göttingen and Vienna and the Alliance of Bioversity International and CIAT. The biologists responsible for the study are Justine Vansynghel, researcher at the Department of Animal Ecology and Tropical Biology at the Julius-Maximilians-Universität Würzburg (JMU), and Carolina Ocampo-Ariza, researcher at the Agroecology Department at the University of Göttingen.

“Animals such as birds, bats and insects, but also rodents, are important for cacao agroforestry,” Justine Vansynghel explains. On the one hand, they can increase yields, for example by pollinating the plants or acting as “biological pest control agents.” On the other hand, they can reduce yields, for example when squirrels steal the valuable seeds and prefer to eat them themselves.

It was known that various animal species affect cacao cultivation and crop yield. “Until now, however, it was not clear how the individual contributions of all these animals interact and how other factors, such as the proximity of the cultivated area to a forest or its level of shading, can influence these contributions,” Carolina Ocampo-Ariza says. As part of their study, which has now been published, the two researchers therefore quantified the animals’ combined contributions to crop yield and explored how distance to the forest and shading affect productivity.

The key findings of their study are:

Why does yield increase with the presence of birds and bats? The authors have a theory about that: “It could be that there are more spiders and ants when insectivores like birds and bats are absent,” they say. If the diet of spiders and ants includes important pollinators, their absence could provoke lower fruit set. In addition, birds and bats could also be directly involved in controlling pests if they eat them themselves. However, further research is needed to confirm these theories, the biologists say.

Why ants increase cacao yields when the cultivated area is near forests is also not clear. “Presumably, the proximity of forests exerts an influence on which ant species settle in cacao-growing areas,” Vansynghel says. That’s because some species are known to benefit cacao plants.

Cacao trees are originally native to South America. In that region, they grow in the undergrowth of tropical rainforests. In so-called agroforestry systems, attempts are being made to copy these conditions: There, the cacao tree is usually planted in the shade of larger trees. In the project, the research team studied a total of 24 such systems in northern and southern Peru. The German Society for International Cooperation (GIZ) funded the project.

According to the scientists involved, the results of the study, which has now been published, contribute to a better understanding of the processes associated with wildlife-friendly agriculture. Based on these findings, they say, it is possible to change cultivation strategies in such a way that the existence of different animal species is not only accepted, but ideally even encouraged. After all, this could help improve the yields of organic cacao in its region of origin.

Quantifying services and disservices provided by insects and vertebrates in cacao agroforestry landscapes. Proceedings of the Royal Society B. https://doi.org/10.1098/rspb.2022.1309