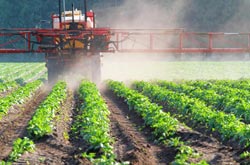 In order to improve the evaluation process for the long-term consequences of pesticides, scientists have developed a new detection method and a model that can enable determinations regarding whether and how readily biodegradable the residues of pesticides are.

Pesticides have a bad reputation: they harm the environment, have negative effects on the diversity of species and pollute the soil. “This is partially correct, but also partially incorrect. Pesticides are important for the efficacy of our modern agriculture methods.

And pesticides are not necessarily pesticides – differentiation is necessary in this context. Generally speaking, biodegradability is supposed to be the top priority when deploying pesticides”, says Prof. Dr. Matthias Kästner, Director of the Department Environmental Biotechnology at the Helmholtz-Centre for Environmental Research (UFZ) in Leipzig.

Worldwide, today approximately 5,000 pesticides are utilized as substances for plant protection and for pest control. As varied as their respective effectiveness is, their effects on the environment are equally varied. Some pesticides are quickly biodegraded, while others take longer. And some of them create chemical bonds with components in the soil and form the so-called bound residues. One has always previously assumed that these residues were, per se, toxic.

This is why pesticides that form more than 70% bound residues are no longer in compliance today. Kästner: “But what exactly is concealed behind these bound residues, i.e. whether or not they really are toxic or what chemical structures they have hidden, could not yet been evaluated.”

By applying the so-called 13C-method, Kästner and his team applied pesticides onto various reference soils and examined them thoroughly regarding their fate. For this purpose, they initially marked the pesticide to be examined with the non-radioactive, heavy carbon isotope 13C – and tracked it in various bio-molecules with the aid of a mass spectrometer after completion of the experiment timeframe. In this manner the scientists were able to determine the residues, the changes in the pesticide, and its breakdown products in the soil.

The most significant result from the study states – there are various groups of bound residues. In the current issue of the technical journal “Critical Reviews in Environmental Science and Technology”, the UFZ research scientists compile their results and introduce a classification system and a modelling approach for bound residues. As regards Type 1, the pesticide itself or its breakdown products of organic materials are deposited in the soil (humus) or trapped within, and can in principle be released at any time.

If the pesticide has undergone a chemical bond with the humus, bound residues are allocated to the Type 2, which can only be released with difficulty. Residues from both Type 1 and Type 2 are to be categorised as toxicologically relevant. “At this juncture a precise examination must be carried out regarding whether or not approval of a pesticide that forms such residues in the soil is possible and defensible,” says Matthias Kästner.

As regards residues of the Type 3, the pesticide was decomposed by bacteria, and the carbon contained therein was transported into the microbial bio-mass. “For these kinds of residues, we can give the “all-clear” signal and confirm that there is no further risk”, Kästner states.

Pesticides, from which the bound residues in the soil are allocated to Type 3, could thus be approved without risk in the future. Conversely, pesticides, which heretofore were considered to be risk-free, could possibly be classified as critical using this method. Kästner says “Only when we are capable of differentiating between biodegradable and high-risk pesticide residues we can act accordingly. This is why we hope that the 13C-method will be included in the dossiers of the approval procedure in the future. This is what we suggested to the German Federal Environmental Agency as well.”

The initial findings from the UFZ study have already been accepted into the assessment processes of the officials involved in the approval procedure. Thus, for the residues of the approved pesticides 2.4 dichlorphenoxyacetic acid (2.4-D for short) and 2 methyl 4 chlorphenoxyacetic acid (MCPA for short), they were able to give the all-clear. “In order to better control the deployment of pesticides and their environmental consequences, we still have a lot of work to do”, says Kästner. “The problems that we had with DDT (dichlorodiphenyltrichloroethane) and atrazine must not be repeated. Therefore, it is very important to understand what actually happens with pesticides after application.” Nicole Silbermann

In the Helmholtz Centre for Environmental Research (UFZ), scientists conduct research into the causes and consequences of far-reaching environmental changes. Their areas of study cover water resources, biodiversity, the consequences of climate change and possible adaptation strategies, environmental technologies and biotechnologies, bio-energy, the effects of chemicals in the environment and the way they influence health, modelling and social-scientific issues. Its guiding principle: Our research contributes to the sustainable use of natural resources and helps to provide long-term protection for these vital assets in the face of global change. The UFZ employs more than 1,100 staff at its sites in Leipzig, Halle and Magdeburg. It is funded by the federal government, Saxony and Saxony-Anhalt. http://www.ufz.de/

The Helmholtz Association contributes to solving major and urgent issues in society, science and industry through scientific excellence in six research areas: Energy, earth and environment, health, key technologies, structure of matter as well as aviation, aerospace and transportation. The Helmholtz Association is the largest scientific organisation in Germany, with 35,000 employees in 18 research centres and an annual budget of around €3.8 billion. Its work is carried out in the tradition of the great natural scientist Hermann von Helmholtz (1821-1894). http://www.helmholtz.de/