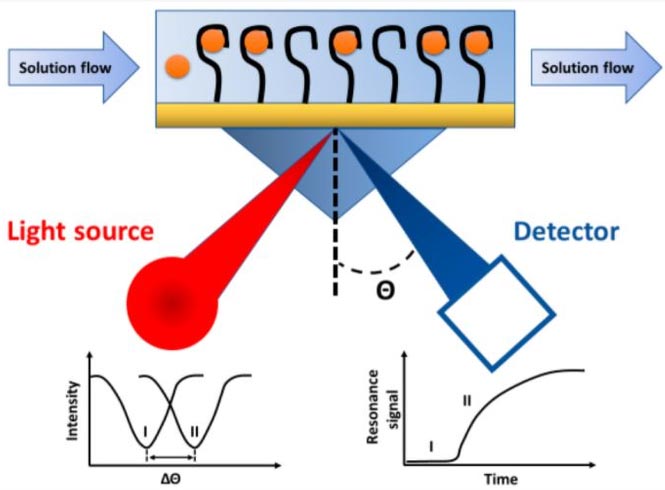 The scheme of the SPR set-up. Aptamers are immobilized at the gold layer sputtered on a glass prism. The binding of the analyte with aptamers resulted in the shift of the resonant angle. Adopted from [184] with permission of Elsevier.
Credit: Kazan Federal University

A publication saw light in Chemosensors.

Mycotoxins are secondary metabolites of fungi that contaminate agriculture products. Their release in the environment can cause severe damage to human health. Aptasensors are compact analytical devices that are intended for the fast and reliable detection of various species able to specifically interact with aptamers attached to the transducer surface.

Among many others, mycotoxins are frequently mentioned as one of the most pertinent problems in food safety and human health control. They affect a broad range of agricultural products and arise in conditions of high humidity and increased temperature, promoting the growth of molds. Most mycotoxins are very toxic. They damage plasma membranes, nucleic acids, affect protein synthesis, and increase cancer risk.

Biosensors utilize specific interactions between the analyte and a molecular receptor of biological origin, or a derivative of the latter, that is immobilized directly on the surface of a transducer. In biosensors, enzymes, antibodies, nucleic acids, etc., are attached onto the transducer so that the interaction between the analyte and the biorecognition layer affects a physical-chemical property, which is transformed into a physical signal (typically an electric signal) by the transducer, allowing the selective quantitative or semi-quantitative detection of the analyte. Biosensors show unique sensitivity and selectivity toward many contaminants.

Aptamers are synthetic oligonucleotides selected from a random nucleotide library by the combination of combinatorial chemistry and affinity chromatography against target analyte. They exert extraordinary analyte binding efficiency that is comparable to that of antigen–antibody interactions. For this reason, they have also been called “synthetic antibodies.”

Meanwhile, aptamers are more stable toward oxidation and hydrolysis than antibodies and can be easily modified by the implementation of the terminal functional groups that are necessary for their integration in biosensor assembly and for the covalent attachment of the labels producing specific signals. Although first aptamers have been designed for binding protein molecules, their application for the detection of small molecules became popular in the past decade due to the advantages of detection of such interactions as hapten binding with antibodies.

Recently, the application of biosensors utilizing aptamers (aptasensors) in mycotoxin analysis has been reviewed with emphasis to the signal measurement mode or individual mycotoxins detected.

Aptamers offer unique opportunities for assembling biosensors intended for the fast and reliable detection of many biologically active species. The interest in mycotoxins detection is mostly related to the extremely low levels of their toxic concentrations and difficulties in their timely detection in agriculture and food safety control. High efficiency of aptamer selection and the specificity of target interactions make it possible to avoid labor- and time-consuming sample treatment. In many cases, a matrix effect can be eliminated by the dilution of the sample or extract. As a result, such aptasensors can be used in field as “point-on-demand” devices. They can be used easily by labor staff and to not have any high use requirements. This makes them competitive against universal conventional techniques, e.g., HPLC or capillary electrophoresis.

The focus on the development of new measurement formats will be shifted to the signal-on (switch-on) aptasensors offering better metrological characteristics, especially in real sample assay. The interest in the selection of new aptamer structures and their derivatization in favor of aptasensor assembling will improve both the operational and analytical characteristics of aptasensors and result in the formation of chimeric materials combining aptasensing with the artificial 3D structures of synthetic materials. Further efforts in aptasensor design will extend to the area of monitoring the environment and foodstuffs to establish safer and more comfortable life for the population.