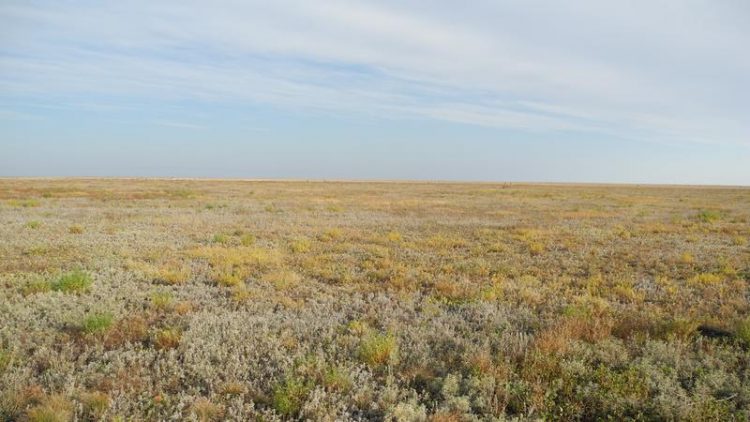 Global agricultural production will need to supply substantially more feed, food, and bioenergy in the coming decades, but most fertile lands are already under cultivation and yields are stagnating. At the same time, cropland abandonment has become a common phenomenon due to post-socialist economic crises in many parts of northern Eurasia, including the steppe region of Kazakhstan in Central Asia.

We tested this hypothesis in Kazakhstan, where approximately 19 million hectares (Mha), or 54 percent, of croplands were abandoned from 1991 to 2000. More recently, re-cultivation of abandoned croplands occurred after 2000 in the course of policy reforms and economic recovery.

However, according to statistics, 14 Mha of former Soviet croplands were abandoned by 2010 in Kazakhstan. Our study showed only a small portion of these lands is feasible to re-cultivate for crop production though.

Kazakhstan is particularly interesting because it was once core area of the massive and rapid Soviet cropland expansion program, often called the Virgin Lands Campaign. Under this program, approximately 45 Mha of primarily virgin steppes were converted into cropland from 1954 to 1963, of which roughly half were in Kazakhstan.

Using archival maps of cropland extent for 1953 and 1961 to represent expansion during the Virgin Lands Campaign, as well as satellite images for 1990, 2000, and 2010, Roland Kraemer and Alexander Prishchepov from the Leibniz Institute of Agricultural Development in Transition Economies (IAMO) and the University of Copenhagen, and their colleagues from Martin-Luther University Halle-Wittenberg, Humboldt University in Berlin and Kazakhstan reconstructed land-use dynamics from 1953 to 2010 for a part (approximately 1/3) of Kostanay province, a representative province of Northern Kazakhstan, the core area for rain-fed crop production in Kazakhstan.

Analysis revealed a six-fold increase of croplands from 1954 to 1990, from just 0.5 Mha to 3.1 Mha, followed by drastic cropland abandonment between 1990 and 2000, when 45 percent of cultivated croplands were abandoned. After 2000, both abandonment and recultivation processes were taking place simultaneously and almost to the same extent, albeit with distinct spatial patterns.

According to Kraemer and Prishchepov, “The massive cropland abandonment after the collapse of the Soviet Union was no surprise to us, as we observed similar processes across other post-socialist Soviet and Eastern European countries. But what did surprise us was that the croplands, which were abandoned in Kazakhstan after the collapse of the Soviet Union, were the lands that were converted from primarily virgin steppes into croplands only after the peak of the Virgin Lands Campaign of 1962 to 1990.”

Kraemer continued, “Our statistical models revealed expansion after the peak of the Virgin Lands Campaign cropland from 1962 to 1990, and massive cropland abandonment after the collapse of the Soviet Union, from 1990 to 2010, primarily areas with lower agro-environmental endowment compared to lands ploughed up during the peak of Virgin Lands Campaign from 1954 to 1961, and constantly cultivated croplands from 1990 to 2010. After 2000, following economic adjustment and an increase of prices for crops, primarily for wheat, some idle croplands were re-cultivated on areas with better agro-environmental endowment.” Kraemer added that “The remaining idle former croplands largely contain very marginal agro-environmental conditions.”

In sum, any further cropland expansion may only be at the expense of marginal lands. If we project our findings to for all of Kazakhstan, only one-third of the currently unused 14 Mha of former croplands is feasible for re-cultivation, though with considerable agro-environmental constraints such as marginal climatic conditions for cropping, prevalent in the Central Asian steppes. “Thus, the focus should be rather on improving crop yields in currently cultivated lands and remaining idle croplands should be left for conservation and traditional extensive livestock grazing. And our findings are in line with what our group at IAMO recently found on limited agricultural potentials of abandoned lands in Russia too”, concluded Kraemer and Prishchepov.

The Leibniz Institute of Agricultural Development in Transition Economies (IAMO) analyses economic, social and political processes of change in the agricultural and food sector, and in rural areas. The geographic focus covers the enlarging EU, transition regions of Central, Eastern and South Eastern Europe, as well as Central and Eastern Asia. IAMO works to enhance the understanding of institutional, structural and technological changes. Moreover, IAMO studies the resulting impacts on the agricultural and food sector as well as the living conditions of rural populations. The outcomes of our work are used to derive and analyse strategies and options for enterprises, agricultural markets and politics. Since its founding in 1994, IAMO has been part of the Leibniz Association, a German community of independent research institutes.